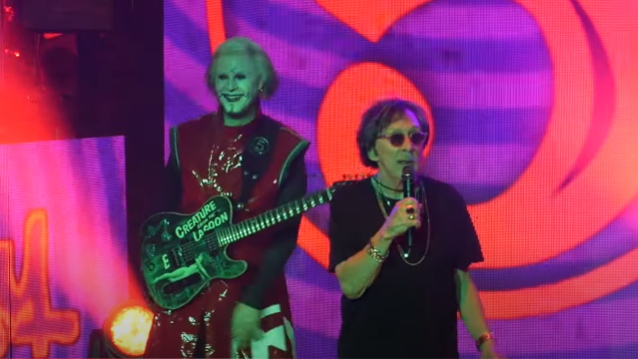 Prior to launching into the song "Shake Your Ass-Smoke Your Grass" at the PNC Bank Arts Center, Rob addressed the crowd: "Maybe you know, maybe you don't know, today is J5's birthday. As you know, J5 is a really big KISS fan, so I thought to myself, 'What can I get John 5 for his birthday that he doesn't already have?' I went out and got him an original Peter Criss… You don't have this at home, J5, I don't think."

Criss then came out on stage and told the audience: "Hey, listen, it's Johnny's birthday, so I wanna say I'd like you all to sing with me happy birthday to Johnny 5." Everyone happily obliged and a visibly touched John 5 gave Criss a hug before the legendary rocker walked off.

Criss and John 5 are longtime friends, with Peter having made a guest appearance on the guitarist's latest solo album, last year's "Sinner".

John 5, whose real name is John William Lowery, spoke about the collaboration a year ago during an appearance on Sirius XM's "Trunk Nation With Eddie Trunk". He said at the time: "Peter Criss is playing drums on the song 'Georgia On My Mind', which is the last song on the record. And I'm telling you… This guy… Barry Pointer, my producer, flew out to Peter's house, set up a couple of mics. Now, this is a jazz type of song, and Peter is known for that jazz feel he has. I shit you not, he sat behind those drums, played two takes. Barry's mouth was dropped open. Wait till you hear this. I mean, it was perfect."

Criss, who turned 76 last December, played what was being billed as his final U.S. concert in June 2017 at the Cutting Room in New York City.

This past May, Peter joined Australian rockers SISTERS DOLL on stage during their concert at the Cutting Room to perform three songs.