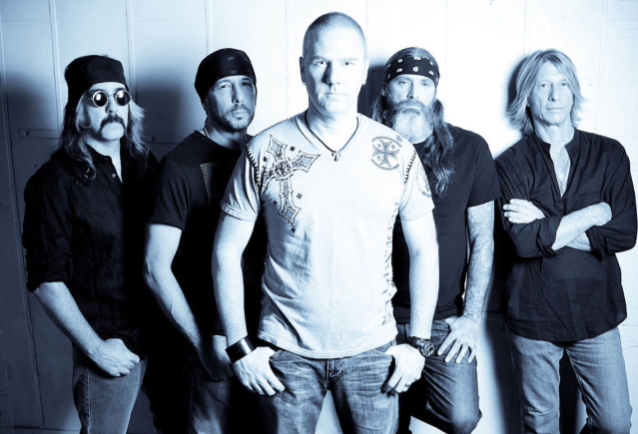 When TROUBLE announced its co-operation with Hammerheart Records in January 2020, it was already planned to record a new LP in the summer of 2020. However, that did not happen due to several reasons, including the ongoing coronavirus pandemic. But recording finally started in July 2022, according to founding guitarist Rick Wartell.

Asked what fans can expect from the upcoming TROUBLE effort, which is expected in 2023, Wartell said that "will be a real TROUBLE album, with all the trademarks."

Back in February 2019, singer Kyle Thomas, who joined TROUBLE in 2012, told "The Metal Magdalene With Jet" about the band's plans for a new album: "This time they've actually written songs with me in mind as the singer instead of, 'These songs were written when Kory Clarke was in the band, but that didn't work out, so let's give it to Kyle and have him back-cleanup, I guess.'"

TROUBLE's first studio album in six years, "The Distortion Field", landed at position No. 25 on the Top New Artist Albums (Heatseekers) chart, which lists the best-selling albums by new and developing artists, defined as those who have never appeared in the Top 100 of The Billboard 200. Released in Europe in August 2013 via FRW Records, the 12-song follow-up to 2007's "Simple Mind Condition" was helmed by veteran producer Bill Metoyer (SLAYER, W.A.S.P., ARMORED SAINT, DARK ANGEL, SACRED REICH, CRYPTIC SLAUGHTER, D.R.I.) and marked the recording debut with Thomas following the departure of the group's frontman of four years, Kory Clarke (of WARRIOR SOUL fame).

TROUBLE played its first show with the band's new lineup in October 2013 at the Day Of Doom festival in Barcelona, Spain.

Singer Eric Wagner left TROUBLE in April 2008, citing his disdain for the touring life as the main reason for his departure.

Eric, who was TROUBLE's original singer, died in August 2021 after a battle with COVID pneumonia. He was 62 years old.

According to Wagner's TROUBLE and THE SKULL bandmate Ron Holzner, Eric was generally opposed to institutionalized medicine but he wouldn't make an exception for the COVID vaccine.

"We argued about it, and he stood his ground on the matter," Holzner told the Chicago Reader. "I always joked, 'The World According To Eric Wagner — you should write a book.' He lived his life his way."