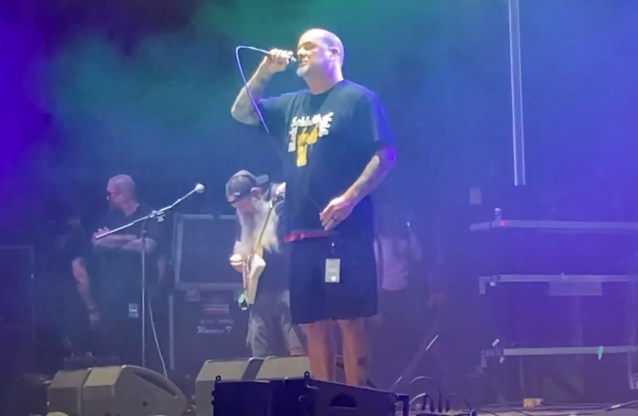 Prior to launching into the DOWN track "Lifer", Anselmo told the crowd: "This next song goes out to Dimebag and Vince. I want you all to throw down. If you know these motherfucking lyrics, sing this shit with me. This is one called 'Lifer'."

In July, it was announced that PANTERA's surviving members Anselmo (vocals) and Rex Brown (bass) will unite with guitarist Zakk Wylde (OZZY OSBOURNE, BLACK LABEL SOCIETY) and drummer Charlie Benante (ANTHRAX) for a world tour under the PANTERA banner.

According to Billboard, the lineup has been given a green light by the estates of the band's founders, Vinnie Paul and Dimebag, as well as Brown, who last year said Wylde wouldn't tour with PANTERA if a reunion were to happen. It's unclear what changed his mind.

Last month, it was announced that the influential heavy metal group will play its first shows in over 20 years in December 2022, starting with a co-headlining slot at Mexico's Hell & Heaven Metal Fest, followed by appearances at three Knotfest festivals in South America.

This past February, at least two months after he first approached Benante about taking part in a new PANTERA tour, Anselmo spoke to The Pit about what he thought Dimebag and Vinnie Paul would say about PANTERA's legacy. He said: "Dimebag and Vince always wanted this band to be a legacy band, to be massive, to be our own conduit to success, simply put. I think Dime and Vince — I know Dime and Vince — would want the legacy and the name of PANTERA to go on and on and on and in everybody's damn face. I know that for sure. Abso-fucking-utely, dude. That would be their biggest dream."