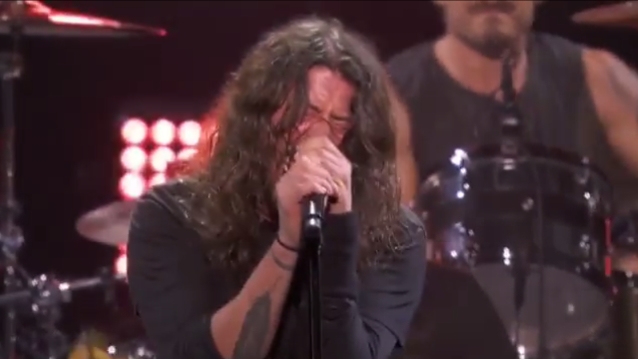 Professionally filmed video footage of FOO FIGHTERS frontman Dave Grohl, METALLICA bassist Robert Trujillo, and AUDIOSLAVE members Tom Morello and Brad Wilk performing a version of AUDIOSLAVE's "Show Me How To Live" at this past January's Chris Cornell tribute concert at the Forum in Los Angeles, California can be seen below.

A number of other artists appeared at the event, billed as "I Am The Highway: A Tribute To Chris Cornell", such as METALLICA, FOO FIGHTERS, Josh Homme of QUEENS OF THE STONE AGE, Tim McIlrath of RISE AGAINST, Taylor Momsen from THE PRETTY RECKLESS, Perry Farrell of JANE'S ADDICTION, THE MELVINS, BLACK SABBATH's Geezer Butler and Ryan Adams, along with members of Cornell's bands SOUNDGARDEN, AUDIOSLAVE and TEMPLE OF THE DOG.

Morello told SiriusXM's "Trunk Nation" about the decision to perform "Show Me How To Live": "We thought about closing the show with 'Like A Stone' because it's really like a beautiful prayer, as well as the most well known AUDIOSLAVE song, but I said, 'Let's close with a fat fucking jam.' So when Dave Grohl and Robert Trujillo stormed on stage and joined us for 'Show Me How To Live' and the place just came apart, we realized that we made the right decision. When I asked Dave what he thought he would like to sing, he said that he thought he could scream his way through that song."

#Audioslave performing "Show Me How to Live" with #DaveGrohl and @robtrujillo at #IAmTheHighway: A Tribute To Chris Cornell.