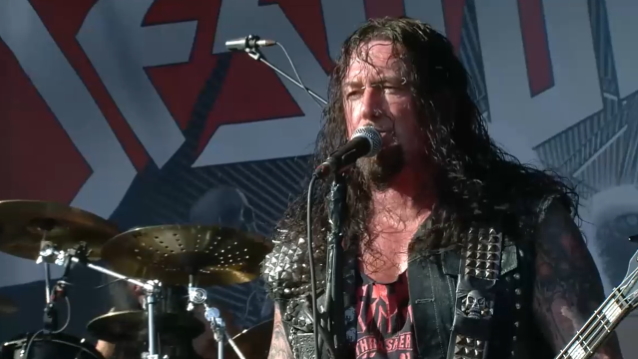 Professionally filmed video footage of DESTRUCTION's August 14 performance at the Alcatraz festival in Kortrijk, Belgium can be seen below (courtesy of ARTE).

DESTRUCTION recently officially parted ways with founding guitarist Michael "Mike" Sifringer and replaced him with Martin Furia. The Argentinian-born, Belgian-based Furia is best known for his work as sound engineer and producer for such bands as NERVOSA and EVIL INVADERS.

Sifringer was the only member of DESTRUCTION to have remained constant throughout the band's career. Schmier appeared on DESTRUCTION's first three albums before leaving the band and being replaced by POLTERGEIST vocalist André Grieder. André's sole recorded appearance with DESTRUCTION was on the "Cracked Brain" album, which came out in 1990. Schmier rejoined DESTRUCTION in 1999.

In other news, DESTRUCTION has released a new single and video, "State Of Apathy", featuring Furia's first recorded appearance with the band.

"State Of Apathy" is available as a digital single, as well as on limited 12-inch slipcase vinyl together with a live-version of "Sign Of Fear" from "Live Attack", with etching in neon green or purple on the B-side.

DESTRUCTION released a new Blu-ray and CD, "Live Attack", on August 13 via Napalm Records. The 22-song release includes footage of the band's nearly two-hour livestream concert from January 2021 at the legendary Z7 venue in Pratteln, Switzerland.

DESTRUCTION's latest studio album, "Born To Perish", was released in August 2019 via Nuclear Blast. The disc was DESTRUCTION's first to feature Randy Black on drums and second guitarist Damir Eskić.