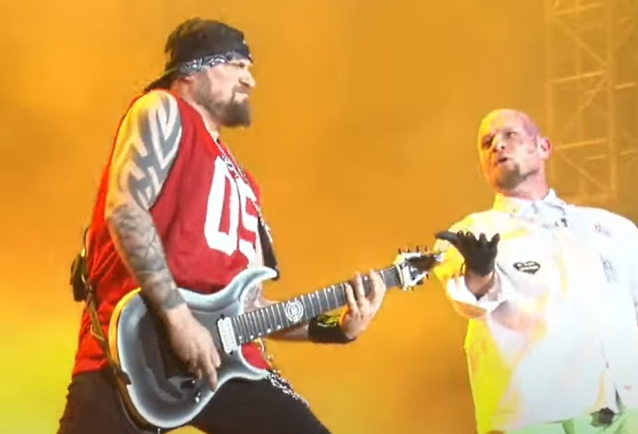 Professionally filmed video of FIVE FINGER DEATH PUNCH's June 12 performance at this year's edition of the Nova Rock festival, which was held on the Pannonia Fields in Nickelsdorf, Austria, can be seen below.

Last Friday (June 10),FIVE FINGER DEATH PUNCH released another new song, "Welcome To The Circus". The track is taken from the band's upcoming album, "AfterLife", which is due on August 19.

The "Afterlife" title track, which was released as a single in April, gave FIVE FINGER DEATH PUNCH the most consecutive No. 1s on Billboard's Mainstream Rock Airplay chart. The song was the band's 12th total No. 1 and eighth entry on the chart in a row. FIVE FINGER DEATH PUNCH broke out of a tie with DISTURBED and SHINEDOWN, each of whom has seven consecutive No. 1s on the chart.

According to Billboard, only three artists boast more No. 1 on the Mainstream Rock Airplay chart, which began in 1981: SHINEDOWN (with 17), THREE DAYS GRACE (with 16) and VAN HALEN (with 13).