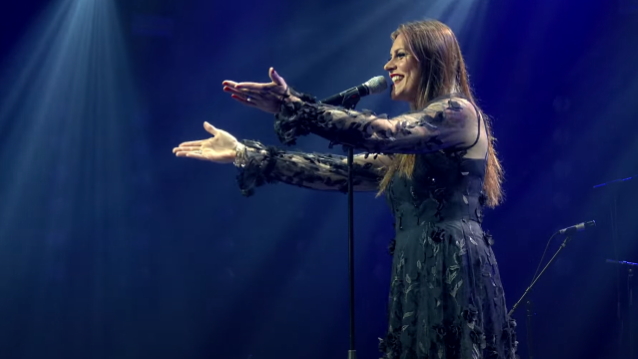 Professionally filmed video footage of NIGHTWISH singer Floor Jansen performing the band's classic song "Ever Dream" at her September 3 solo concert at AFAS Live in Amsterdam, Netherlands can be seen below. This track was the opening song of the show that had been crowdfunded by her fans. All of Floor's solo gigs were sold out and the Amsterdam gig marked the end of her Dutch tour after being postponed three times.

This past summer, Floor said during an appearance on the "Breaking Absolutes With Peter Orullian" podcast that she has been working on a solo album since shortly before the beginning of the pandemic. "And it really kickstarted my own creativity that I haven't really been able to use over the years," she said. "It's nice that it gets out. And I would like to do more of that and actually finish that album and make those steps and find a way to combine a solo career with NIGHTWISH and my life at home, which I even more value after spending so much time here in this green heaven [in Sweden] where I live."