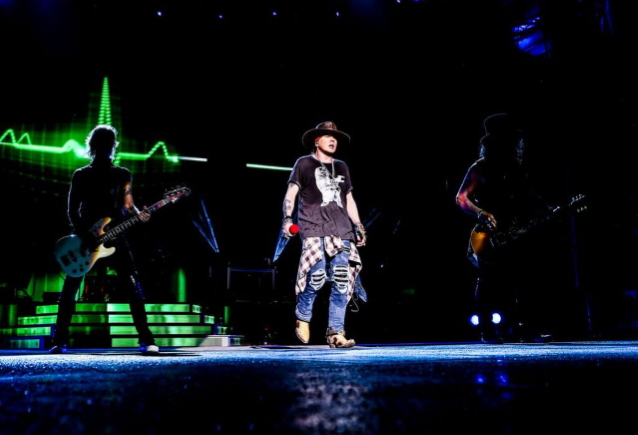 GUNS N' ROSES has released video footage of the band's November 20, 2016 performance at Estádio Mané Garrincha in Brasília, Brazil. The 36-minute clip is part of the GN'R web series dubbed "Not In This Lifetime Selects" featuring highlights from the four-year "Not In This Lifetime" tour.

In a recent interview with Guitar Player's "No Guitar Is Safe" podcast, Slash spoke about what it felt like for him to step back out on stage with GUNS N' ROSES for the first time in over two decades at the band's April 2016 concert at the Troubadour in West Hollywood, California.

In 2019, Slash told Guitar.com that his first concert back with GUNS N' ROSES was an "overwhelming" experience. "It was so cool," he said. "Because it was a long time — we're talking more than 20 years from the last show in 1994… it was 22 years since the last time we'd played together. And obviously I'd played with [bassist] Duff [McKagan] [since then] but there's a certain dynamic in the three of us together. It was awesome, and it's a really great experience."

Earlier this week, GUNS N' ROSES postponed its European tour for a second time due to the ongoing COVID-19 pandemic.

In 2019, "Not In This Lifetime" became the No. 3 highest-grossing tour in the history of Billboard Boxscore.

GUNS kicked off its long-rumored and long-awaited reunion tour with the aforementioned club show in Hollywood and appearances in Las Vegas and at California's Coachella festival.