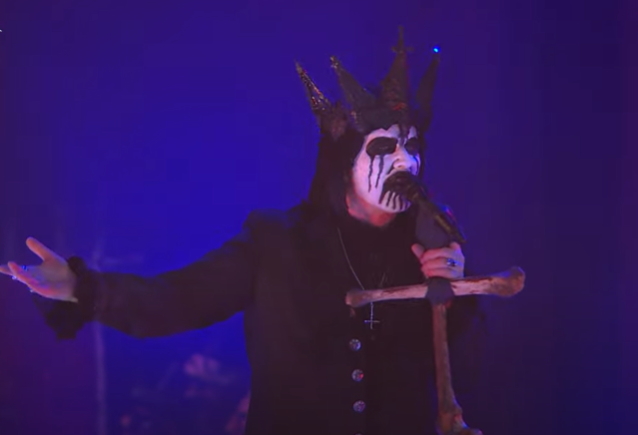 Professionally filmed video of MERCYFUL FATE's August 4 performance at the Wacken Open Air festival in Wacken, Germany can be seen below.

Earlier this month, MERCYFUL FATE announced its first North American headlining tour in over two decades. The journey, which will feature support from by KREATOR and MIDNIGHT, will commence on October 25 in Dallas, Texas and weave its way through fourteen cities, closing on November 16 in Atlanta, Georgia. The tour follows the band's stunning headlining performance at this year's edition of Psycho Las Vegas.

Vocalist King Diamond comments: "These will be the first MERCYFUL FATE concerts in North American theaters in over twenty years. Memories of a lifetime. Your special chance to see MERCYFUL FATE with the full European festival production, but up close and personal. You cannot miss this… I hereby respectfully invite you to Come To The Sabbath by which you may free your soul and feast with us in the dark of Night. Witches and Demons, you may come as you are! Satanic Regards - King Diamond 666."

MERCYFUL FATE is currently working on a new album and recently gave fans a taste of the new material when they debuted a song called "The Jackal Of Salzburg" in Germany this past June as well as at Psycho Las Vegas. The band's current lineup is King Diamond on vocals, Hank Shermann and Mike Wead on guitars, Bjarne T. Holm on drums and Joey Vera on bass.