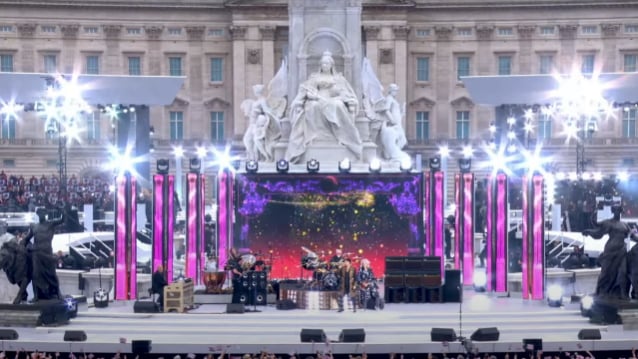 QUEEN + ADAM LAMBERT kicked off the open-air Platinum Jubilee concert outside Buckingham Palace in London on Saturday (June 4),performing a medley of classic songs, including "We Will Rock You", "Don't Stop Me Now" and "We Are The Champions". Diana Ross, Sir Rod Stewart and DURAN DURAN were among the other big names at the event.

The Platinum Party at the Palace is part of the Platinum Jubilee weekend, which celebrates the 70th anniversary of Queen Elizabeth II's ascension to the throne. The national bank holiday began on Thursday and will conclude on Sunday.

Lambert, along with QUEEN legends Brian May and Roger Taylor, were interviewed by Express just before last night's spectacular show. Brian, who previously performed atop Buckingham Palace 20 years ago during a concert marking the Queen's Golden Jubilee, said: "It’s wonderful to be back. We have some new presentation ideas, so it's going to be very interesting… And we have some songs which everyone knows and they have a special relevance tonight because it's about the Queen and how amazing she has been and how we all want her to carry on."

Adam talked about playing for such a special occasion and his role in the band.

"It's wild," he said. "We're on tour right now so we're ready to go, we're very warm and it always feels great to be a guest of Brian and Roger on the stages around the world. And now to be a guest of the United Kingdom for the Jubilee, it's a huge honor.

"What I've learned about the Queen [is] what an impressive lady, what a graceful and powerful presence in this country. I'm thrilled...

"As I was on stage [rehearsing earlier], I turned around I realized I was in the gate of the palace and thought this is definitely the most surreal thing I have done in a while."

Closing the two-and-half-hour show was legend Ross with her first U.K. live performance in fifteen years.

Hosts Kirsty Young and Roman Kemp led live coverage of the Platinum Party at the Palace which was broadcast live across the BBC. 22,000 people attended the event, including 10,000 tickets allocated in a public ballot and over 7,500 tickets for key workers, members of the Armed Forces, volunteers, and charities.

The unique Platinum Party stage design consisted of three stages, linked by walkways, which created a 360-degree experience in front of Buckingham Palace and The Queen Victoria Memorial. Linking the stages together into one overall design were 70 columns representing Her Majesty's 70-year reign that can be illuminated to provide a full formation of lights and beams. For the first time, two of the three stages sat immediately in front of Buckingham Palace, framing the iconic home of the Queen.