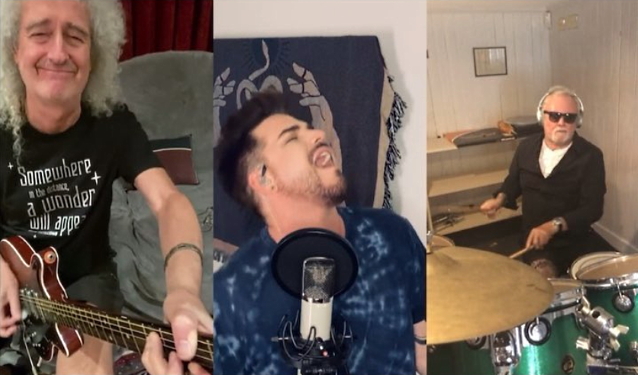 Watch QUEEN + ADAM LAMBERT Perform 'We Are The Champions' In Quarantine

A video of QUEEN + ADAM LAMBERT performing a quarantine version of "We Are the Champions" can be seen below. The split-screen clip, featuring Lambert along with guitarist Brian May and drummer Roger Taylor, included a slight tweak to the track's lyrics, with Lambert changing the titular pronoun from "we" to "you" in an apparent display of solidarity.

Lambert, Taylor and May first shared the stage during "American Idol" in May 2009 for a performance of "We Are The Champions". They teamed up again in 2011 at the MTV European Music Awards in Belfast, Ireland for an electrifying eight-minute finale of "The Show Must Go On", "We Will Rock You" and "We Are The Champions" and in the summer of 2012, the singer performed a series of shows with QUEEN across Europe as well as dates in Russia, Ukraine and Poland. They have since completed a number of tours and performed at some of the biggest festivals in the world.

Earlier in the month, Lambert, who was the openly first gay man to have a No. 1 album on the Billboard 200 chart, spoke about his ongoing stint with QUEEN in an interview with Finland's Kaaos TV. He said: "It's an absolute honor to be singing QUEEN music for fans all around the world. These songs are so famous and so huge and this band is so iconic, and so to take the stage with them always feels like a real opportunity and a real gift that I've been given. And I love Brian and Roger — they are so easy to work with — and we have fun. It's a big family feel now. And we've been doing this for eight years, and I love that I continue to have the opportunity to tour with them."

Asked if he was totally nervous when he first started touring with QUEEN, Lambert said: "In the beginning, I was definitely was. Yes, absolutely. And now what's so nice is that we're eight years in, and now I don't get nervous. And so it's really helped my confidence and it's really given me a sense of accomplishment working with them."

May previously described Lambert as the only singer the band had found capable of filling the shoes of QUEEN's original frontman Freddie Mercury, who died in 1991 of complications from to AIDS. "Adam is the first person we've encountered who can do all the QUEEN catalog without blinking," said May. "He is a gift from God." Taylor echoed the guitarist's sentiments, adding: "[Adam's] incredibly musical, and we certainly take anything he says quite seriously."

- this version is for those of you who like things to be the right way up ! Bri