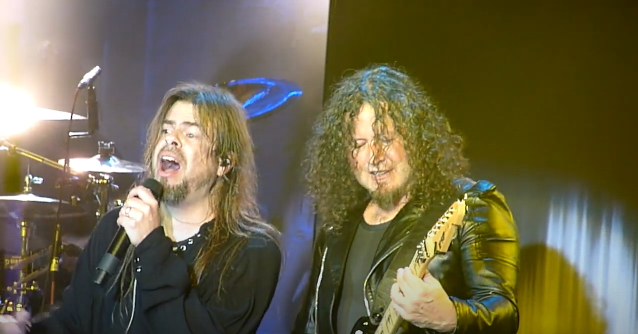 Fan-filmed video footage of QUEENSRŸCHE's October 23 performance at Snoqualmie Casino in Snoqualmie, Washington can be seen below.

For the past four and a half years, Casey Grillo has been filling in for QUEENSRŸCHE's original drummer Scott Rockenfield, who stepped away from the band's touring activities in early 2017 to spend time with his young son.

The drum tracks on "The Verdict" were laid down by QUEENSRŸCHE singer Todd La Torre.

Since late May, Stone has been handling second-guitar duties in QUEENSRŸCHE, which announced in July that longtime guitarist Parker Lundgren was exiting the group to focus on "other business ventures."

Preshow with Queensrÿche! Shoutout to 102.5 KZOK: The Classic Rock Station’s Waldo for hanging with the guys before they hit the stage tonight!