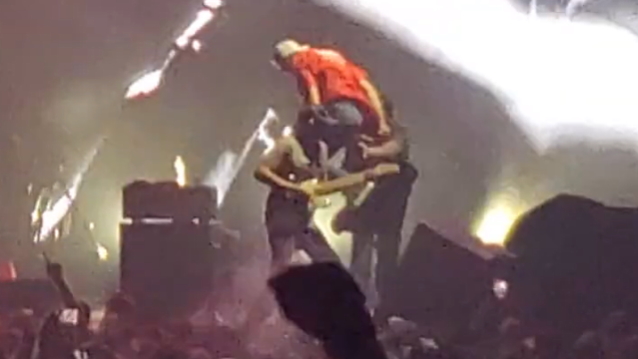 Watch: RAGE AGAINST THE MACHINE's TOM MORELLO Gets Accidentally Knocked Off Stage By Security In Toronto

RAGE AGAINST THE MACHINE guitarist Tom Morello got knocked off the stage during the band's concert in Toronto Saturday night (July 23).

The incident happened during the final song, "Killing In The Name", of RAGE AGAINST THE MACHINE's set at the Scotiabank Arena. After a fan (in a red shirt) sprinted toward the front of the stage, he was blocked by security and hurled off into the crowd. However, amid the chaos, security accidentally tackled Morello, knocking him down and off the front of the stage.

Singer Zack De La Rocha eventually noticed what had happened and briefly halted the performance. Luckily, Morello did not appear to be hurt, and returned to the stage, allowing him and his bandmates to re-start the song.

RAGE AGAINST THE MACHINE played its first Canadian shows in more than a decade on July 15 at RBC Ottawa Bluesfest and July 16 at Festival D'été De Québec in Québec.

De La Rocha, who got hurt during a show in Chicago on July 11, had to be carried on stage by two members of the crew and performed from a seated position for the entire set.

De La Rocha reportedly injured his leg four songs into the band's set at the United Center, while Zack and his bandmates were performing "Bullet In The Head", a classic song from the group's 1992 self-titled debut album.

RAGE AGAINST THE MACHINE kicked off its long-delayed "Public Service Announcement" tour on July 9 in front of roughly 30,000 fans at Alpine Valley Music Theatre in East Troy, Wisconsin. During the show, RAGE AGAINST THE MACHINE decried the Supreme Court's decision to overturn Roe v. Wade and end the federal constitutional right to an abortion. De La Rocha repeatedly screamed "freedom" while a video screen flashed with statements about gun violence, black maternal mortality and abortion access.

Prior to the current tour, RAGE AGAINST THE MACHINE last played together at L.A. Rising and has resisted calls for a reunion, with De La Rocha previously believed to be the lone holdout. Morello and his fellow RAGE bandmates Tim Commerford (bass) and Brad Wilk (drums) have since teamed up with PUBLIC ENEMY's Chuck D. and CYPRESS HILL's B-Real in the similarly styled PROPHETS OF RAGE.