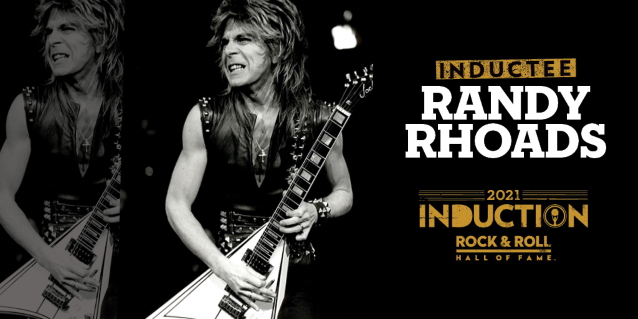 Legendary Ozzy Osbourne guitarist Randy Rhoads was posthumously inducted into the Rock And Roll Hall Of Fame during the 2021 ceremony.

Rhoads, who played in Ozzy's band four decades ago, received the Musical Excellence Award at this year's event, which was held yesterday (Saturday, October 30) at Cleveland, Ohio's Rocket Mortgage FieldHouse.

Rhoads was inducted into the Rock Hall by RAGE AGAINST THE MACHINE guitarist Tom Morello who stated in a video message. "Randy Rhoads is a peerless talent. He revived Ozzy Osbourne's career as his gunslinger sideman. And it was Randy Rhoads's poster that I had on my wall... You could study Randy's songs in a university-level musicology class and bang your heads to them in a 7-11 parking lot."

Also offering a video tribute was METALLICA's Kirk Hammett, who stated about Randy's death: "All of a sudden, the curtain came down unexpectedly and the show was over before it really, really got going." Longtime Ozzy guitarist Zakk Wylde spoke highly about his predecessor, saying "Randy, hands down, sits at" the round table of greatness in the Hall Of Fame alongside Jimi Hendrix, Jimmy Page, Jeff Beck, Eric Clapton and Eddie Van Halen.

"Thank God that he's getting recognized by the Rock And Roll Hall Of Fame. He finally got there in the end. I'm sad that his mother was not alive to see it, because he was very close to his mom. I know his brother, Kelle, and his sister, Kathy, are going to be really chuffed about it. It shows that he's not been forgotten. He was a dedicated, true musician, and he was a lovely guy. I still think about him all the time."

The induction ceremony will air November 20 on HBO and stream on HBO Max alongside a radio simulcast on SiriusXM.