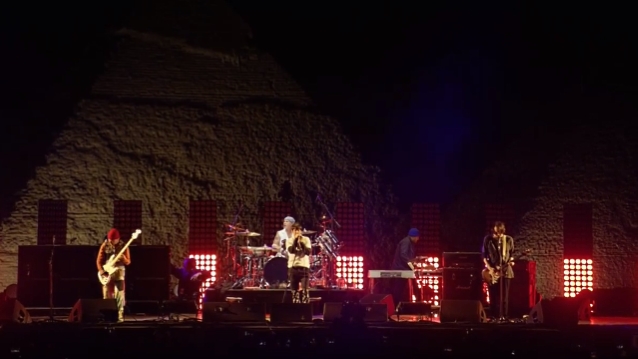 Earlier today (Friday, March 15),Nugs.net, the leading live music distribution platform for concert recordings and live streams, offered a free live stream of the RED HOT CHILI PEPPERS playing live from Egypt's Pyramids of Giza. This was the first time any event has been live streamed from the last-standing wonder of the ancient world.

You can now watch the entire performance below.

Brad Serling, Nugs.net founder and CEO, commented: "We've produced live streams from some exotic places like the North Pole, but never from as magical a setting as the foot of The Great Pyramid. We've been releasing live recordings from the CHILI PEPPERS for several years, so we jumped at the opportunity to broadcast the band's historic appearance in Giza."

7 Cinematics CEO Adam Paul added: "To us, this is the Super Bowl, the biggest of the big. We have trained, prepared and dreamed of an event of this magnitude for decades. It is our time and we are ready. We are truly humbled and honored to be able to show our talents on the world stage."

The concert was filmed in 4K by 7 Cinematics, directed by George Elizondo, and live streamed in FullHD via Nugs.net to the band's social media channels where fans can watch live for free. The audio recording of the show will be released at LiveChiliPeppers.com in multiple download formats ranging from MP3 to hi-resolution audio.

Bassist Flea said about the event: "My heart is abuzz with joy at the prospect of performing in Egypt. I'm so grateful and humbled for the impending experience." He continued, "The pyramids, it's unbelievable, we just jumped at the opportunity... I have always been fascinated by Egypt and that region of the world and I am so excited to go."

The CHILI PEPPERS recently played on the island of Tasmania for the first time ever, while in Australia for the band's first tour in the country in 12 years. The band also performed last month at the Grammy Awards with POST MALONE and have been working on music for their 12th studio LP.

The CHILI PEPPERS started releasing live recordings of every show they play in 2011 with Nugs.net, and have since added a handful of archival shows dating back to 2000 to LiveChiliPeppers.com.

Founded in 1997 as a fan site for downloading live music, Nugs.net has evolved into the leading source for official live music from some of the largest touring artists in the world. METALLICA, PEARL JAM, PHISH, RED HOT CHILI PEPPERS, Bruce Springsteen and many other artists distribute recordings of every concert they play through Nugs.net. The platform offers downloads, CDs, webcasts, and subscription streaming services, delivering exclusive live content to millions of fans daily. Nugs.net is available on iOS, Android, AppleTV, Sonos and desktop. 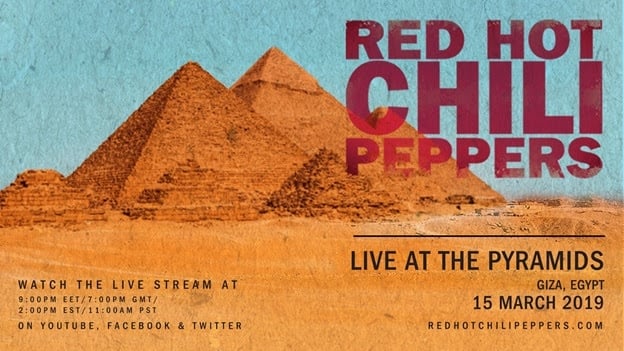