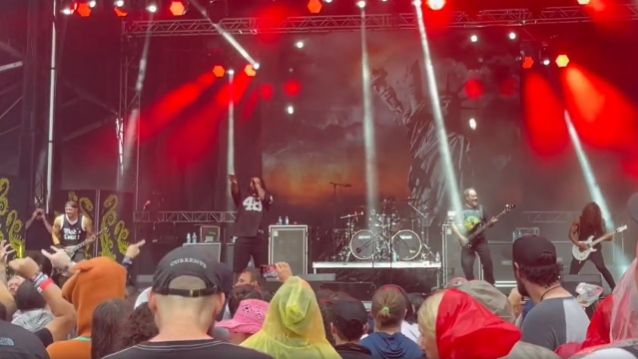 This past May, Doc told the "Drinks With Johnny" podcast that he didn't rule out putting out new music with GOD FORBID.

"I was kind of the main kind of riff writer [and] songwriter for the band for a good portion of those last few records," he explained. "So me as a writer, there's always stuff [I'm working on that] I'm, like, 'That sounds like a GOD FORBID thing.' So there's always stuff that I'll just kind of put to the side or kind of [have] in the back of my [head] that theoretically could be that. So there's definitely some material that definitely could exist, but I am very much taking it one step at a time.

"I have a tendency to have a lot of big ideas and go [down] a lot of rabbit holes [in] my head, but unfortunately — not even unfortunately — you want to make sure everyone's a part of that, not just it's my little kind of… Sometimes I get all hyped up in my head, but it's. like, it takes a village, and everyone has to be on board," he continued. "It's important to make sure everyone is excited about anything you're doing; that's just very, very important to me.

"I really enjoy the band dynamic and having everyone be involved and be excited about stuff because I really believe in the synergy of that. I think GOD FORBID was one of those bands where the sum was better than the parts, that everyone together made something that outpaced our actual talent and ability, you know, because of the chemistry."

GOD FORBID's latest album, "Equilibrium", was released in March 2012 via Victory Records. The bulk of the CD was recorded by Mark Lewis (THE BLACK DAHLIA MURDER, WHITECHAPEL, DEVILDRIVER, TRIVIUM),with Jason Suecof (TRIVIUM, ALL THAT REMAINS, THE BLACK DAHLIA MURDER, CHIMAIRA, DEVILDRIVER) stepping in during the the vocal-tracking stage. The effort was mixed by acclaimed Swedish producer Jens Bogren, who previously worked with such acts as KATATONIA, OPETH, PARADISE LOST and AMON AMARTH.

God Forbid what an amazing show. Thank you so much for blessing us with your talent once again. I hope to see more of you in the future. And special thanks to #blueridgerockfestival for bringing us amazing talent like these guys. Having a blast this weekend.

@DocCoyle Finally seen @godforbidmusic live and I was only disappointed that they ran out of time,still didn't see empire of the gun or end of the world but I hope to see you guys again in the future, and as promised, I bought all your shit pic.twitter.com/MX3qWxCtYI

First full God Forbid rehearsal in 9 years. Getting these tunes tiiiiiight for Blue Ridge Rock Festival on Saturday. We hope you are all ready for this reunion. We are making history 🤘🤘🤘🤘

Bad Wolves rolled through El Paso, TX last night and Doc Coyle and Byron got to catch up. We figured we’d give a little update before this reunion show.