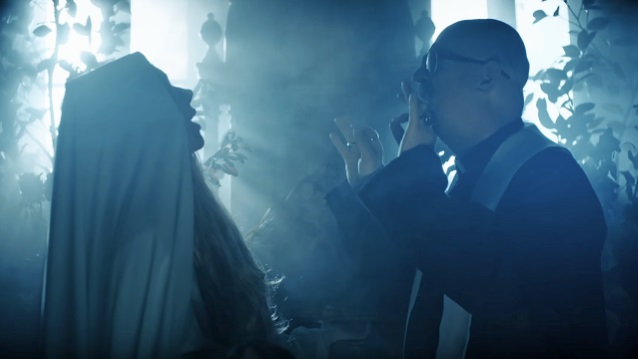 Watch ROB HALFORD In IN THIS MOMENT's Video For 'Black Wedding'

IN THIS MOMENT has released the official music video for the song "Black Wedding". The track, which features a guest appearance by JUDAS PRIEST frontman Rob Halford, is taken from IN THIS MOMENT's latest album, "Ritual", which came out last July. The clip was co-directed by frontwoman Maria Brink and Robert John Kley and features a gloriously wicked and thoroughly dark take on the traditional matrimonial ceremony.

Brink said that having Halford guest on "Ritual" was "an honor." She also told "DOMKcast" that the PRIEST singer added his vocals after all the other parts were already laid down.

"We actually recorded the song first, we had all of our stuff on it, and then he came in afterward and put his parts into it," she said. "But we had already kind of shown him [how we wanted it to sound]."

Maria added that "Black Wedding" is "definitely gonna be a single. And I think that's gonna be a favorite, for sure, on this album. And we're honored to have [Rob] be a part of it. He's a legend. So we're so excited. We became friends with him, and what an honor to have him be a part of it."

IN THIS MOMENT guitarist Chris Howorth told Metal Wani in an interview that Halford was a natural choice for the "Black Wedding" track.

"Ritual" was released via Atlantic Records in partnership with Roadrunner Records.