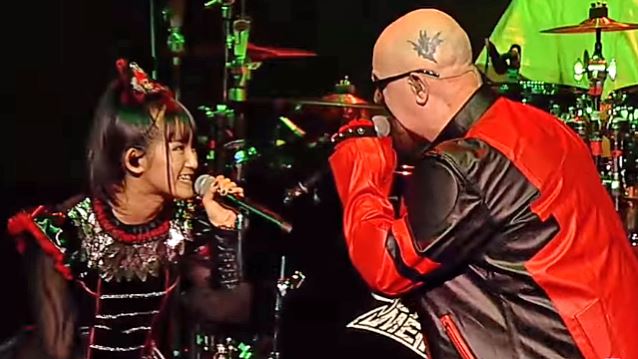 "That was really intense; BABYMETAL give a thousand percent just like PRIEST," Halford said in a statement after the performance. "They're leading the charge into the new frontier of heavy metal."

"It was really amazing and fantastic," BABYMETAL's Su-Metal said. "A collaboration with Rob Halford, the 'Metal God,' has always been my dream. I never imagined that dream would come true!"

Halford previously posed for a photograph with BABYMETAL backstage at the Rock On The Range festival in 2015.

BABYMETAL has taken the world by storm with its infectious brand of pop metal. This year, the band was nominated in the "Best International Band" category. The APMAs marked BABYMETAL's first U.S. award show, as well as their only show confirmed in Ohio for 2016.