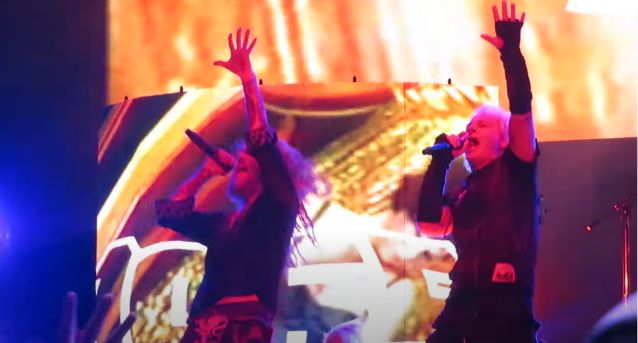 POWERMAN 5000 vocalist Spider One and the masked STATIC-X frontman Xer0 (who is rumored to be DOPE singer Edsel Dope) joined ROB ZOMBIE on stage this past Thursday (July 21) in Noblesville, Indiana to perform the WHITE ZOMBIE classic "Thunder Kiss '65". Fan-filmed video of their appearance is available below.

POWERMAN 5000 and STATIC-X were supposed to perform alongside ROB ZOMBIE and MUDVAYNE at Ruoff Music Center on Thursday but had their sets scrapped after one of the semitractor-trailers carrying the production tour broke down on the way to Indianapolis, the amphitheater in Noblesville tweeted.

Last December, Spider One, whose given name is Michael David Cummings, spoke to the "Podsauce" podcast about growing up with his brother, actor-singer-songwriter Rob Zombie, in a small town where television and music were the gateways to the world.

"[There's] only a couple of years difference in age [between us], so we grew up loving all the same stuff," he told "Podsauce" hosts Alesha Reneé and Dax Holt. "But the funny thing is we grew up in a household that was about as normal as you could possibly have. [Our] parents weren't artists. My dad worked in a furniture factory for his entire life. My mom stayed home, raised the kids. And there wasn't a lot of that around us. We grew up in a small town where there really wasn't anything to do. So TV and music was really like this gateway to the world, that there were other things out there other than this little town that we lived in. I mean, we watched everything and anything. And growing up in the '70s and '80s, there was a lot of crazy content... It just opened up the world."

Eight years ago, Spider One told the Dallas Observer that he and his brother aren't competitive. "I wouldn't say that at all," he said. "I would say that we are supportive and collaborative. We talk about what each of us is doing. He clearly has his own thing. I just try to do my thing too. There is plenty of room for everybody. It has never been a competitive thing. We've done a couple of things together over the years. He did some vocals on one of my records back in 1999. We've played a couple shows together, nothing too major. With him in his world and me in mine, it's almost impossible to get together for dinner."

As a rock icon and filmmaker with a unique vision, Rob Zombie has continuously challenged audiences as he stretches the boundaries of both music and film. He has sold over 15 million albums worldwide, and is the only artist to experience unprecedented success in both music and film as the writer/director of eight feature films with a worldwide gross totaling more than $150 million. Each of Rob Zombie's seven solo studio albums have debuted in the top 10 on Billboard's 200 chart, including his most recent album, "The Lunar Injection Kool Aid Eclipse", in 2021. Zombie is an eight-time Grammy nominee, with his most recent nomination for "Best Metal Performance" at the 2022 awards. Rob Zombie's ninth feature film, "The Munsters", is set to release later this year. 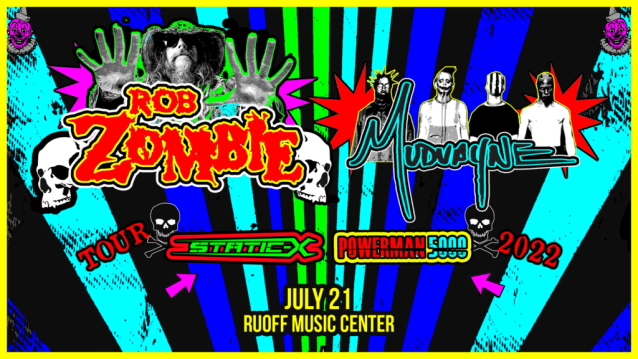