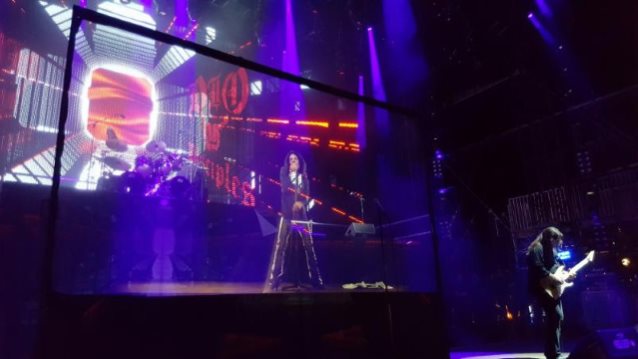 Over 75,000 fans were rocked at the Wacken Open Air music festival in Germany this past weekend as the late Ronnie James Dio reunited with his bandmates via hologram. The surprise performance took place at the end of DIO DISCIPLES' set to close the world's largest annual live heavy metal event. DIO DISCIPLES features members of the DIO band, which last performed with Ronnie in 2008 before he passed away two years later, leaving a void in the rock community. Eyellusion, a hologram entertainment company focused on the live music market, created the hologram and produced the groundbreaking performance.

The first video footage of the Ronnie James Dio hologram — which took place during a performance of the song "We Rock" — can be seen below.

Almost one year in the making, Eyellusion's Ronnie James Dio production represents the world's first rock hologram performance and the first time a hologram has been accompanied by a live band in a traditional concert setting. The Wacken Open Air festival marked the debut of the Ronnie James Dio hologram, which features the singer's actual live vocals and will be toured globally in 2017, with further details to be announced.

"When I first experienced the full production of Ronnie performing with his band as a hologram, I couldn't believe my eyes and ears," said Wendy Dio, who manages DIO DISCIPLES and is also a member of the Eyellusion team, supporting industry relations. "With Eyellusion, we have been able to get Ronnie back up on stage where he belongs, ensuring that his music and memory live on. I want Ronnie's fans around the world to share this experience."

"We know how much the fans miss Ronnie and the special and unequaled element that he brought to his live performances," said Craig Goldy, lead guitarist for DIO DISCIPLES. "Being able to recreate that same kind of magic for his fans at Wacken was incredible. For so many years Ronnie always invested big in his live shows as his way to give back to the fans, and that is exactly what we aimed to do with this latest performance. We can't wait to bring this experience to even more of his fans and perhaps even a newer generation when we bring this incredible live experience on the road next year."

"At first I did not know what to think or to expect. But after I got over the initial surprise, it felt like Ronnie was still with us. It was wonderful, sad and emotional," stated David James of California, a fan present for the performance at Wacken Open Air.

"I have watched quite a few hologram clips online and nothing can compare to the performance here tonight at Wacken — this was the most realistic of all. Amazing! Ronnie James Dio and metal will live forever," added Anna Lorenz, a 25-year-old fan from Germany, also in attendance.

"Eyellusion is creating the best hologram content and live music productions for a completely new concert experience," said Jeff Pezzuti, CEO of Eyellusion. "We're taking every step to capture the excitement and energy that comes from seeing your favorite band perform live. That means when the lights go down in the venue, the amps are loud, the band sounds great and the pyro is blinding. We are creating an entirely new way for fans to experience their favorite music."

Touring remains a viable revenue stream for many artists as music industry business models continue to evolve. However, it is not always financially or physically feasible to get to every market where there is demand. Further, massive loyal fan bases still exist for artists that are no longer able to tour or that can only do a set number of dates within a year. Eyellusion is expanding touring opportunities for emerging and established acts alike. In addition to unique shows based around digital recreations of artists, Eyellusion can stream live holographic performances of one show to many locations, opening global possibilities to play new markets and venues.

"The economics of making music are changing, with tours being more important than ever," said Wendy Dio. "For artists who have been blessed with legions of fans around the world, the question is how to continue meeting the demand for your music. At the same time, newer acts are thinking about how to build a following and reach more people. Today, all artists need to find new, modern ways to connect with fans and Eyellusion is supporting those efforts."

"Holograms represent a major opportunity for live music and fan engagement, but they have to be done right," said Pezzuti. "We believe we've cracked the code on delivering the highest quality hologram-based events, creating the ultimate live music experience that keeps fans coming back. The Eyellusion team's unmatched production capabilities and deep music industry ties bring crucial industry knowledge to our collaboration with artists as we work toward a shared vision of creating unforgettable shows. We can't wait to see music fans everywhere on the road."