Watch SAMMY HAGAR Improv Over JOE SATRIANI's 'Up In Flames'

Video of Sammy Hagar playing "improv" guitar over his CHICKENFOOT bandmate Joe Satriani's "Up In Flames" can be seen below.

Hagar said: "Joe having me play guitar amongst some of the greatest guitarist on earth is like me asking Joe to sing on one of my records with Robert Plant, Stephen Tyler [sic], Axl Rose.... I think you get the picture. When in doubt of what to do, just fucking do it!"

Added Joe: "Sammy is rock 'n' roll! One thing I miss about CHICKENFOOT is playing rhythm guitar on stage while Sammy rips up a few solos. Put a Les Paul in his hands, plug it into a Marshall amp, turn it up, and he delivers the goods. He's a natural. Watch him alternate between melodic phrases and face-ripping lines over 'Up In Flames'."

The backing track is from Joe's new release "Stripped x Three", three albums of songs with the lead and melodies removed. Full backing tracks from the complete "Shapeshifting", "Black Swans And Wormhole Wizards" and "Is There Love In Space?" albums are included, along with a special digital compilation booklet with original liner notes and credits and it is all packaged within a replica Joe Satriani Ibanez signature guitar USB stick and custom case.

Said Joe: "At the heart of it is my love for composing unique and moving music for the electric guitar. I love the journey as much as the end result. With this compilation of backing tracks, you get to peak behind the curtain a bit and experience that journey as I built the songs in the studio. And, of course, you can play along!"

CHICKENFOOT, which features Satriani, Hagar, ex-VAN HALEN bassist Michael Anthony and RED HOT CHILI PEPPERS drummer Chad Smith, has been largely inactive since 2012 when it toured with Kenny Aronoff on drums due to Smith's busy schedule with his main band. 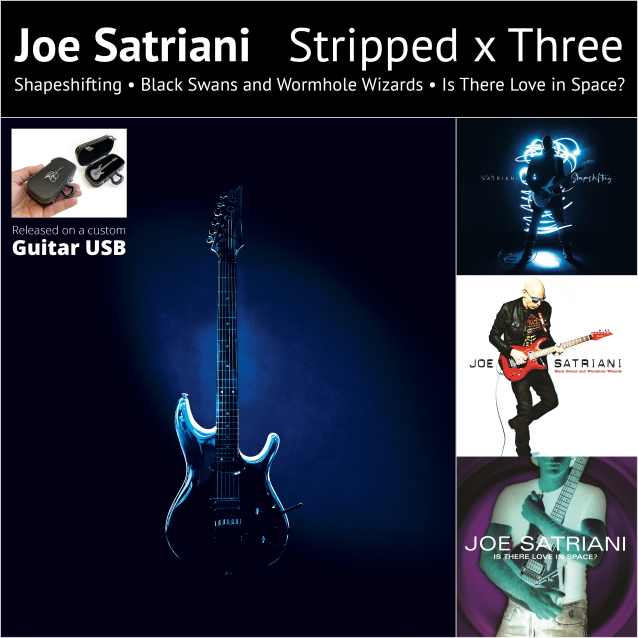