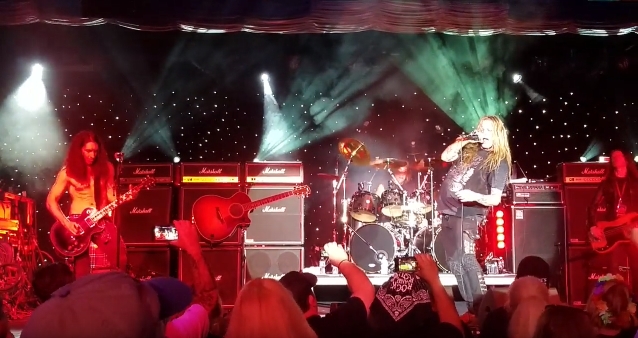 Fan-filmed video footage of Sebastian Bach performing the SKID ROW classic "I Remember You" on February 16 aboard the Rock Legends Cruise VII can be seen below.

In 1999, SKID ROW reformed and, after a bit of shuffling over the years, featured a lineup consisting of original bassist Rachel Bolan and guitarists Dave "Snake" Sabo and Scotti Hill, alongside drummer Rob Hammersmith and singer Johnny Solinger.

Bach joined SKID ROW in 1988 as the replacement for the band's original lead singer Matt Fallon, who sang on demo versions of songs that were eventually re-recorded for SKID ROW's first LP.

SKID ROW's 1989 multi-platinum, self-titled effort featured the Top 10 hits "18 And Life" and "I Remember You" and was supported by a six-month tour with BON JOVI.

Following his departure from SKID ROW, Bach started performing in Broadway shows like "Jekyll & Hyde" and "The Rocky Horror Show", and appeared on television shows, including "Gilmore Girls" and VH1 reality show "SuperGroup". He also pursued a solo musical career, most recently releasing the 2014 album "Give 'Em Hell".