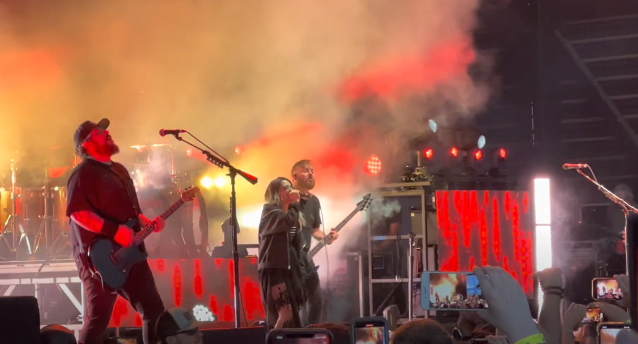 SEETHER was joined by former FLYLEAF singer Lacey Sturm last night (Friday, May 13) during the band's concert at CCNB Amphitheatre at Heritage Park in Simpsonville, South Carolina to perform the FLYLEAF song "I'm So Sick". Fan-filmed video of her appearance can be seen below.

Last December, Sturm released the official music video for her latest single, "Awaken Love". The track followed the previously released "The Decree" and "State Of Me".

Performing live with SKILLET before the pandemic shut down arena tours, Lacey has since been writing new music and finding creative ways to connect with fans. Singing on BREAKING BENJAMIN's 2020 single "Dear Agony (Aurora Version)", which peaked at No. 13 on the Billboard 200 after 20 weeks on the chart while racking up well over 16 million views on YouTube alone, Lacey has also performed with SHINEDOWN and others on drive-in theater stages and has hit virtual stages along with METALLICA, THREE DAYS GRACE, SEETHER and others during the Recording Academy-sponsored Octane Home Invasion festival.