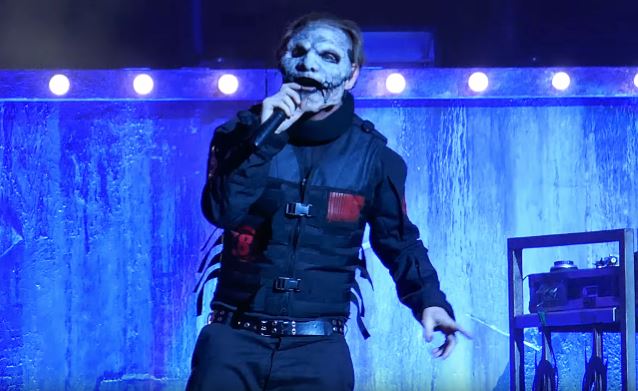 Taylor was ordered by doctors to refrain from headbanging and jumping when the band kicked off its summer tour on June 28 in Nashville, Tennessee. The group was forced to postpone its North American trek with MARILYN MANSON by three weeks after Taylor underwent what he described as "an unplanned spinal surgery."

Taylor told Billboard magazine: "I've had to kind of reassess what I do live. Up to this point, I didn't realize how physical I am when I sing — even more than just headbanging or jumping or running or any of that stuff. I punctuate physically when I sing, and I never realized that before. Even the first few shows, I was finding I had to hold myself back from more than just the headbanging, y'know? I would do something and it would be, like, 'Okay, that hurts. Okay, we can't do that for awhile.' I've had to reassess what I do live. But the positive for me is I love the challenge of it. I love the fact that it's like, 'Well, okay, maybe I've relied on those things for too long. Let's see if I can get through a show or a tour without having to go to these kind of mainstays,' and the shows have been great, so it's working."

Taylor added that the silver lining is that he has been a better vocalist during the tour. "I've been damn near on, pitchwise," he said. "My stamina's a lot better. It's like I'm really kind of filling in all these weird blanks in [the music] I never even realized were there. I love the challenge of it. It's being able to tune in even more to the music, really kind of being in it, more than I ever was before."