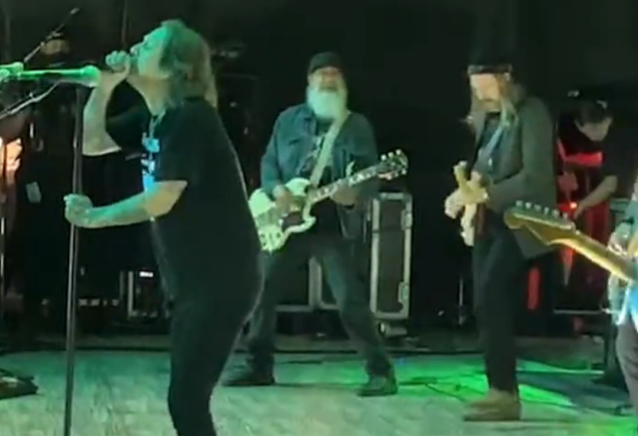 SOUNDGARDEN's Kim Thayil joined THE BLACK CROWES on stage at the latter band's Seattle-area show this past Wednesday (July 20). Also appearing with them was R.E.M. guitarist Peter Buck.

The musicians came out during the encore of THE BLACK CROWES' concert at Chateau Ste. Michelle Winery Amphitheatre in Woodinville, Washington. Buck appeared first, joining THE BLACK CROWES for a cover of his band's "The One I Love". He and THE BLACK CROWES were then joined by Thayil as they performed a rendition of THE VELVET UNDERGROUND's "Rock And Roll".

A 12-minute video of the performance was shared by THE BLACK CROWES on their Instagram and can be seen below.

THE BLACK CROWES recently embarked on the 2022 North American tour celebrating their classic 1990 debut album, "Shake Your Money Maker". The 34-date trek kicked off on June 9 and will run through July 24 before picking up again on August 13 and concluding on August 29.

The 2021 leg of THE BLACK CROWES' "Shake Your Money Maker" tour ended last September at Bethel Woods Center for the Arts in Bethel, New York.

This past March, former THE BLACK CROWES drummer Steve Gorman filed a lawsuit against the paid over unpaid royalties. In his complaint, filed in Los Angeles Superior Court against Chris and Rich and The Black Crowes Partnership, Gorman claimed faulty accounting resulted in him missing out on royalties from THE BLACK CROWES' classic albums.