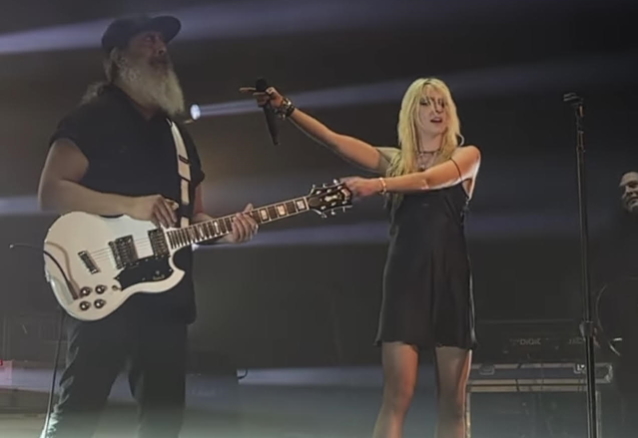 SOUNDGARDEN's Kim Thayil joined THE PRETTY RECKLESS on stage last night (Wednesday, August 31) at the Moore Theater in Seattle, Washington to perform the song "Only Love Can Save Me Now".

After the show, THE PRETTY RECKLESS frontwoman Taylor Momsen shared photos and video of Kim's appearance and she wrote in an accompanying message: "Thank you to the legendary Kim Thayil for joining us for an unforgettable night at Seattle's Moore Theater…I'm once again humbled to share the stage with you my dear friend, what an amazing human being #KimThayil #OnlyLoveCanSaveMeNow".

The studio version of "Only Love Can Save Me Now", featuring special guests Thayil and his SOUNDGARDEN bandmate Matt Cameron, is taken from THE PRETTY RECKLESS's latest album, "Death By Rock And Roll", which was made available in February 2021 via Fearless Records in the U.S. and Century Media Records in the rest of the world.

"Only Love Can Save Me Now" was recorded at Seattle's legendary London Bridge Studios, where seminal LPs like PEARL JAM's "Ten" and SOUNDGARDEN's "Louder Than Love" were laid down.

Taylor previously stated about "Only Love Can Save Me Now": "It's hard to describe the feeling around our song 'Only Love Can Save Me Now'. The song was born out of tragedy and brought to life by two of my favorite musicians of all time — Matt Cameron and Kim Thayil. Hearing them play it is simply surreal. This song represents getting through the worst time in my life, and yet, is one of my proudest achievements. It means that there is hope, and that life has to go on, and most importantly, is worth living."

Thayil said: "It was super fun to spend time in the studio with Taylor, Ben [Phillips, THE PRETTY RECKLESS guitarist] and Matt, and to have the opportunity to contribute to this THE PRETTY RECKLESS song. 'Only Love Can Save Me Now' has elements of classic SOUNDGARDEN and the riff would probably be at home on 'Louder Than Love'. These are great guitar parts that Ben came up with. They lay down a heavy foundation that allows the entire song to open up with Taylor's powerful and haunting vocals. Cheers, and thanks to THE PRETTY RECKLESS for inviting Matt and me to play on this track!"

Cameron shared: "Kim and I had a blast recording with Taylor and THE PRETTY RECKLESS on their single 'Only Love Can Save Me Now', a fantastic rock track that sounds amazing at full volume. Many thanks to the band for inviting us to play on their new album 'Death By Rock And Roll'."