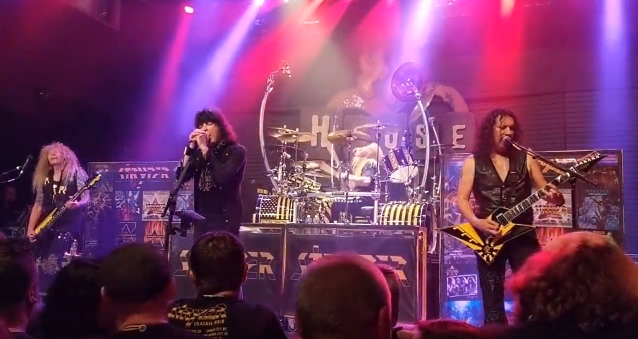 Fan-filmed video footage of STRYPER performing a cover version of the FIREHOUSE classic "All She Wrote" on June 5 at House Of Blues in New Orleans, Lousiana can be seen below.

STRYPER's current lineup includes former FIREHOUSE bassist Perry Richardson. He joined the band in October 2017 as the replacement for STRYPER's longtime bassist Tim Gaines, who was fired from the group earlier that year.

"The first time I met the guys in STRYPER was in 1985, when my first band, MAXX WARRIOR opened for them in Charlotte, North Carolina," said Richardson. "From that first meeting, they have always been one of my favorite bands and a huge influence on me personally and musically. To have the honor of becoming a member of STRYPER is an indescribable experience for me. I am so overwhelmed, I can't put it into words. To be asked to be a member of one of my favorite all-time bands is one of the greatest honors of my career."

Formed 36 years ago, STRYPER is the first overtly Christian metal band to go mainstream. The group's name comes from Isaiah 53:5, which states: "But he was wounded for our transgressions, he was bruised for our iniquities: the chastisement of our peace was upon him; and with his stripes we are healed."