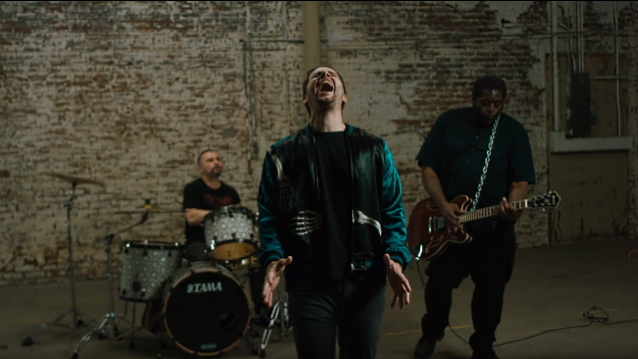 SYSTEM OF A DOWN drummer John Dolmayan will release his solo debut, "These Grey Men", on February 28. The eight-song LP contains covers of tracks by such varied artists as Madonna, RADIOHEAD, AFI, Eminem and David Bowie.

The official music video for the disc's first single, a reworking of RADIOHEAD's "Street Spirit", can be seen below. The song features a guitar solo from RAGE AGAINST THE MACHINE's Tom Morello, as well as contributions from AVENGED SEVENFOLD vocalist M. Shadows, guitarist James Hazley, bassist Tom Copossela and keyboardist Danny Shamoun.

"This song in particular is a really touching and moving song," Dolmayan told Rolling Stone. "I love the morose, in-your-room-and-it's-raining-outside, it's cold and your girlfriend dumped you feeling that this song always gave me… But when I listened to it, I'd be, like, 'I kinda wish the drums came in earlier,' or, 'How would [John] Bonham approach this song if this was a [LED] ZEPPELIN song?' Because I'm such a fan of the song, I wanted to do a version of it in homage."

M. Shadows said about the track: "When John told me he wanted to reimagine some of his favorite songs for an album, I was very intrigued. I've always respected RADIOHEAD but wasn't familiar with their full catalog. When John sent 'Street Spirit', I instantly was blow away by the sounds. Since then, I have been on a huge RADIOHEAD kick. Adding Tom Morello to our version was the icing on the cake. I feel this recording stays true to the original while adding John's overall vision."

The "Street Spirit" clip was directed by Vicente Cordero of Industrialism Films.

"These Gray Men" also features Dolmayan's SYSTEM OF A DOWN bandmate Serj Tankian on a cover of David Bowie's "Starman" and the TALKING HEADS' "Road To Nowhere".