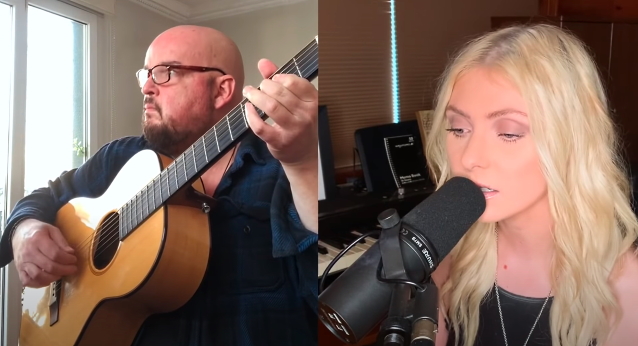 THE PRETTY RECKLESS's Taylor Momsen teamed up with Alain Johannes, co-creator of the highly influential '90s alternative rock band ELEVEN as well as a key contributor on releases from QUEENS OF THE STONE AGE, THEM CROOKED VULTURES and Chris Cornell, to record a cover version of the Cornell song "The Keeper". The performance video, which can be seen below, made its online debut this past Saturday (August 15) during Morrison Hotel Gallery's (De)Tour, a daylong charity music festival featuring an all-star lineup of artists working in association with MusiCares, National Independent Venue Association (NIVA) and Spotify in support of fellow artists, crew members, and independent venues and promoters.

Last month, Momsen, who has repeatedly named SOUNDGARDEN as one of her favorite bands, spoke to "Offstage With DWP" about the influence of the iconic Seattle alternative rock act on her music career and her songwriting approach. She said: "Their level of artistry and songwriting and musicianship is so above what I can even comprehend. It's so intricate, it's so detailed, it's so good and it's so smart that it takes a minute to understand SOUNDGARDEN. They're catchy, and everyone's heart the hits, but when you really investigate SOUNDGARDEN and get into it, it's like a religion — it's so in-depth and it's just superior to so much music that's out there.

"I've based my whole career and identity off of THE BEATLES and SOUNDGARDEN. They're two bands that I put next to each other, and I know that might sound crazy to some people. But they're so important. There's very few bands, I think, that needed to exist, and SOUNDGARDEN is one of those bands that there'd be a hole in the music world without their records."

Just days after Cornell's passing, Momsen, whose band was the opening act for SOUNDGARDEN's spring 2017 run of dates, paid tribute to the legendary singer by performing a cover of AUDIOSLAVE's "Like A Stone" at the Rock On The Range festival in Columbus, Ohio.

SOUNDGARDEN's Kim Thayil and Matt Cameron guest on THE PRETTY RECKLESS's upcoming album, "Death By Rock And Roll", which will be released in early 2021. The song with Cameron and Thayil, called "Only Love Can Save Me Now", was recorded at Seattle's legendary London Bridge Studios, where seminal LPs like PEARL JAM's "Ten" and SOUNDGARDEN's "Louder Than Love" were laid down.