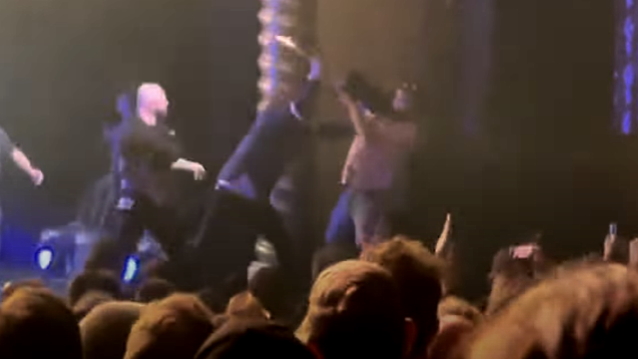 THE BLACK CROWES' Rich Robinson used his guitar to forcibly remove a stage invader during the band's concert on Sunday (November 20) in Melbourne, Australia.

Shortly after THE BLACK CROWES launched into "Stare It Cold", which was the tenth song of the band's set, a large man attempted to run across the stage from the right side, with several security personnel scrambling to intercept him take him down. As the man made his way toward the center of the stage, THE BLACK CROWES singer Chris Robinson raised his microphone stand and swung it in the man's direction but was unable to make contact. The man then made it to the left side of the stage, where he got into a brief scuffle with one of the roadies before Rich removed his guitar and used it to pound the man just above the chest, forcing him to jump off.

THE BLACK CROWES stopped the performance for a short time and a visibly angry Chris pointed and yelled at the audience member, who appeared to be talking back to the frontman, although it's unclear what was being said. The man was then reportedly escorted from the building by security.

Melbourne was the final stop of THE BLACK CROWES' Australian tour, which kicked off on November 13 in Sydney. During the trek, the band celebrated the 30th anniversary of its 1990 breakthrough album "Shake Your Money Maker", playing the LP in its entirety along with other classics from across its vast catalog. It marked THE BLACK CROWES' first tour of Australia in 14 years.

Joining Chris and Rich in the new BLACK CROWES lineup are returning bassist Sven Pipien, who played with the band live from 1997 up until the band's hiatus in 2015, along with Brian Griffin on drums, Joel Robinow on keyboards and Isaiah Mitchell on guitar.

Bit of biff at tonight's Black Crowes gig. I didn't quite catch it on video, but old mate grabbed Rich's guitar. Big bro Chris not taking prisoners. Old mate literally smelled like he'd shat in his pants when Security pushed him past. Absolute dickhead.@girlfrmpawnshoppic.twitter.com/ua73Mopxxd 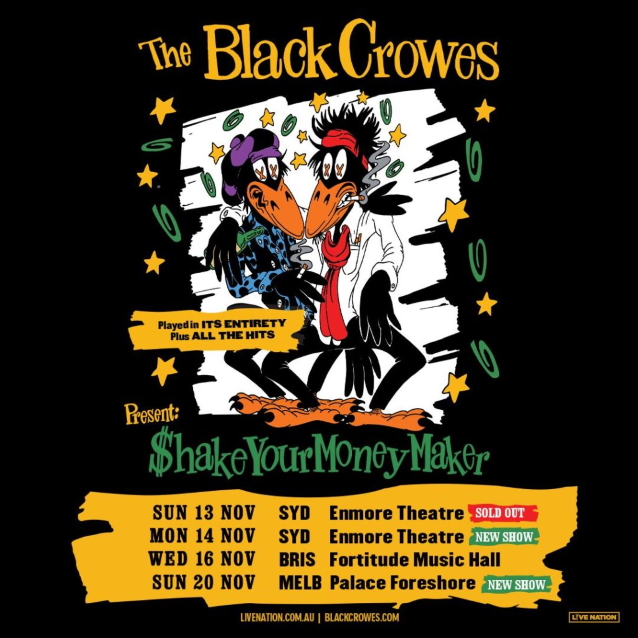