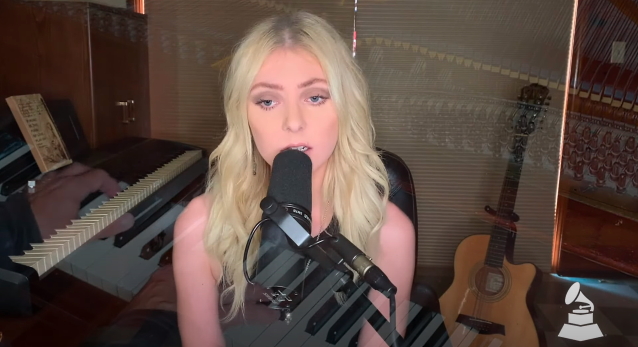 For the past decade, THE PRETTY RECKLESS has been putting out stadium-worthy rock anthems. Their sophomore album, 2014's "Going To Hell", earned the group three No. 1 rock hits on Billboard, including for "Heaven Knows".

For the latest episode of Grammy.com's "Press Play" series, the powerhouse act performs an acoustic rendition of "House On A Hill" from "Going To Hell". Frontwoman Taylor Momsen describes the heart-wrenching song (inspired by the Vietnam War) as a "cry for humanity."

THE PRETTY RECKLESS's upcoming album, "Death By Rock And Roll", is the band's first to be made without longtime producer Kato Khandwala, who died in April 2018 from injuries sustained in a motorcycle accident.

Momsen has confirmed that RAGE AGAINST THE MACHINE guitarist Tom Morello guests on "Death By Rock And Roll". Morello appears on a track called "And So It Went".