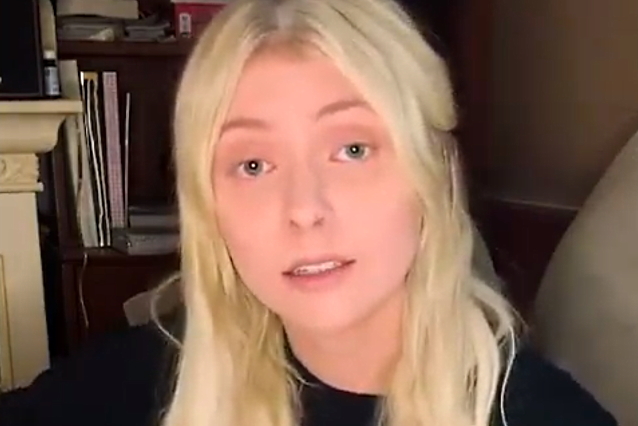 The nearly four-hour virtual event functioned like a "festival" to help raise funds for bands and crew affected by the coronavirus pandemic which is sweeping the globe.

Momsen offered hope to viewers during the broadcast, saying: "I can't wait for this storm to pass, as I'm sure all of you can't either, which it will. This is going to pass."

You can watch video of Taylor's appearance below.

THE PRETTY RECKLESS recently inked a U.S. deal with Fearless Records. The band, which is signed to Century Media Records for territories outside the USA, will release its fourth album, "Death By Rock And Roll", later in the year. The disc's first single will arrive soon.

This past February, Momsen said that THE PRETTY RECKLESS's new album was "almost finished," and she described the songs as "incredibly personal." The LP also reportedly feature "can't-miss collaborations" with several iconic artists.

THE PRETTY RECKLESS's producer Kato Khandwala died in April 2018 from injuries sustained in a motorcycle accident.

A couple of days after Kato's death, Momsen paid tribute to the band's longtime collaborator, calling him "our ringleader" and "our confidant" and saying that "nothing will be the same without him."

Since forming in 2009, THE PRETTY RECKLESS has quietly made history. The group's 2010 debut, "Light Me Up", ignited this rise. It was 2014's "Going To Hell", however, that set the whole genre ablaze. It debuted in the Top 5 of the Billboard Top 200, spawning three No. 1 hits — the gold-certified "Heaven Knows" (the biggest rock song of 2014),"Fucked Up World" and "Follow Me Down" — a feat that had not been accomplished by a female-fronted group since THE PRETENDERS in 1984. Their third opus, "Who You Selling For", boasted a diverse set of standout tracks, including "Oh My God", "Back To The River" and "Take Me Down". It also garnered praise from Vogue, Nylon and Billboard. Along the way, the group toured with the likes of SOUNDGARDEN and GUNS N' ROSES and tallied half-a-billion streams.