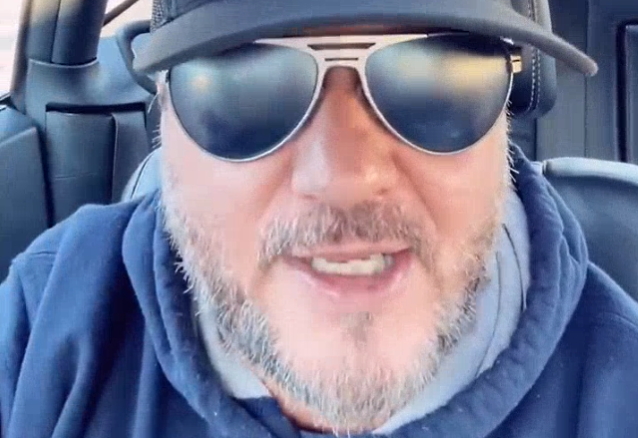 Video of former JUDAS PRIEST singer Tim "Ripper" Owens belting out an a cappella version of the song "Blood Stained" from the band's 1997 album "Jugulator" can be seen below.

Owens sang a couple of lines from the track while filming a new video message on Cameo, which lets users hire celebrities to record brief, personalized video messages about virtually any topic.

Tim recently told Metal Express Radio that he "loves" making videos for Cameo. The 54-year-old vocalist is charging purchasers $40 per video and he is offering a "24-hour delivery." Tim is charging $245 for a video for business use.

"I would love to get some [Cameo requests for videos as a way to] break up with somebody or something like that, or 'I hate you' or any of those," he said. "I haven't gotten any of those. They're almost all… [Wishing someone a] happy birthday is, obviously, [a common request] or a happy anniversary — just to cheer people up. Some people have gotten bad news and they want their buddy to be cheered up."

He continued: "It's really fun. I enjoy doing them. I usually do 'em right before or after I walk into the gym, so I'm always in my car and my sweat clothes. But I love doing 'em, and I usually make 'em worth it. Sometimes I realize I'm talking for three or four minutes on these things. If you watch the other ones, they're really quick, and mine just goes forever… I enjoy it, and people get a good one."

Owens joined PRIEST in 1996 and recorded two studio albums with the band — the aforementioned "Jugulator" and 2001's "Demolition" — before PRIEST reunited with Rob Halford in 2003.