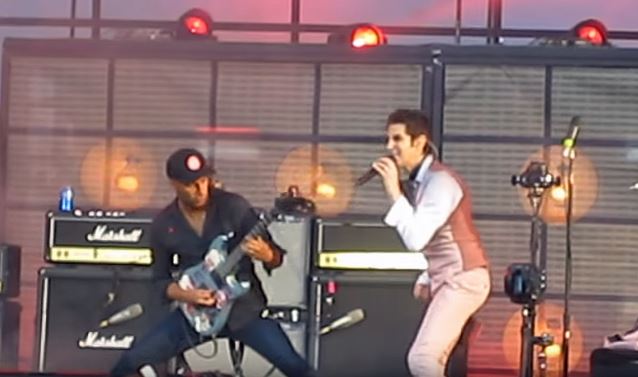 RAGE AGAINST THE MACHINE guitarist Tom Morello joined JANE'S ADDICTION on stage Saturday night (July 30) at the Lollapalooza festival in Chicago to perform the JANE'S classic "Mountain Song". Fan-filmed video footage of his appearance can be seen below.

A longtime fan of JANE'S ADDICTION, Morello praised the band when he inducted the group into Guitar Center's Hollywood RockWalk in 2011.

"[Hearing JANE'S ADDICTION for the first time] blew my mind and jolted the axis of my understanding of rock music," Morello said at the time (see video below). "I'd never heard anything like it. It was like a punk-rock LED ZEPPELIN. JANE'S provided all the testosterone-fueled guitar riffage that my suburban upbringing required, but mixed it with gorgeous acoustic songs and an underground artistry that was completely original and completely awesome."

He added: "NIRVANA often gets credit for being the first 'alternative' band to break through, the band that changed music and led rock out of the hair metal wilderness of the 1980s. That's just not true. It was JANE'S ADDICTION: inspiring, intelligent, furiously rocking and artistically deep as fuck.

"As their number one fan, I'm happy to report that my good friends Jane's Addiction are just as great today as that day I snuck into their rehearsal space long ago."

JANE'S frontman Perry Farrell said after Morello's speech, "That speech made me sound so damn good, I don't need to look in the mirror ever again. Just play that over and over every morning."

JANE'S ADDICTION is currently doing shows in support of the 25th anniversary of its 1991 album, "Ritual De Lo Habitual".