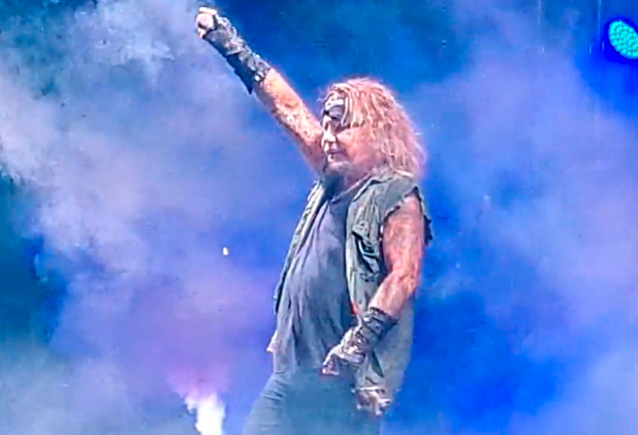 Fan-filmed video footage of MÖTLEY CRÜE singer Vince Neil's August 28 performance at VetFest in Oswego, Illinois can be seen below.

The four-day festival raised funds for local charities with an emphasis on veterans and Oswego Unit District 308.

When his participation in VetFest was first announced, Vince said in a statement: "It's an honor to play an event like this for such a good cause. I have several family members who served in the military, including my father, so a show like this is near and dear to my heart. My band and I are looking forward to performing a fun, energetic and exciting show performing all the hits. I am certain a good time will be had by all. See you there!"

This past weekend's show came three months after Neil struggled to complete his solo concert at the Boone Iowa River Valley Festival in Boone. Based on fan-filmed video footage of the May 29 gig posted on YouTube, the 60-year-old rocker, who hadn't performed in more than a year and a half due to the COVID-19 pandemic, began losing his voice several songs into his set, which consisted exclusively of CRÜE classics and cover songs previously recorded by the band.

Well it wasn't the 80's crew. But Vince Neil showed up and jammed for the vets. We all get old, and he found time to come and jam some classic crew songs. Thank you Vince Neil The Legendary Voice Performing All The Hits at VetFest Oswego Vince Neil.