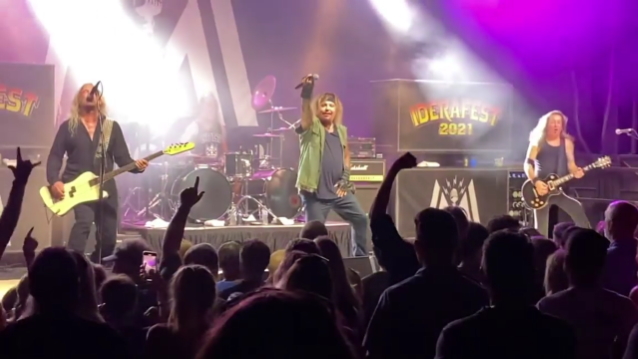 Video footage of MÖTLEY CRÜE singer Vince Neil performing the band's classic songs "Dr. Feelgood" and "Looks That Kill" at a private concert last night (Thursday, August 5) in Austin, Texas can be seen below. Also appearing at the event was Sammy Hagar, according to SiriusXM radio personality Eddie Trunk, who shared the clips on his Instagram page.

Last night's show came more than two months after Neil struggled to complete his solo concert at the Boone Iowa River Valley Festival in Boone. Based on fan-filmed video footage of the gig posted on YouTube, the 60-year-old rocker, who hadn't performed in more than a year and a half due to the COVID-19 pandemic, began losing his voice several songs into his set, which consisted exclusively of CRÜE classics and cover songs previously recorded by the band.