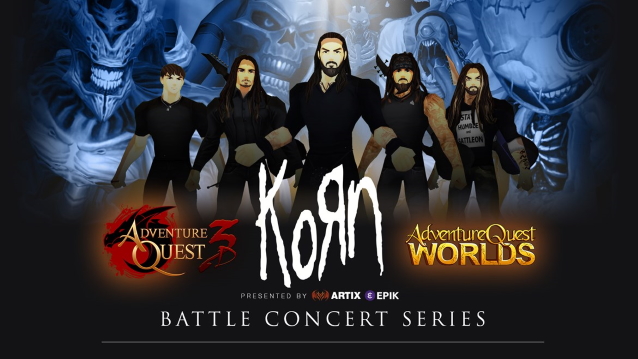 A virtual version of KORN performed in the multiplayer video games AdventureQuest 3D and AQWorlds. The band played on stage as part of a special in-game event starting Tuesday, August 20.

You can now watch video footage of the "performance" below.

KORN worked with games firm Artix Entertainment on the event, which saw the band open the "Battle Concert Arena" within the game worlds.

The developer converted the band into characters to create the "multiplayer monster mosh pit." It was free for players to attend, but Artix also launched a paid (via in-app purchase) "special event pack" for the event, which costs $9.99.

Artix said: "The special event package includes the KORN-branded items, the Heavy Metal Mosh Pit Marauder Armor, exclusive travel forms which let you transform into the new monsters from the show, bonus quests, and more… including a backstage pass so you can get a virtual backstage experience with the virtual band and take a virtual selfie…"

The event will run for a month before it disappears from the game.

KORN's new album, "The Nothing" ,will be released on September 13 via Roadrunner/Elektra. The follow-up to 2016's "The Serenity Of Suffering" was once again produced by Nick Raskulinecz.

KORN has teamed up with ALICE IN CHAINS for a co-headlining amphitheater tour across North America. The trek kicked off on July 18 in Del Valle, Texas and is hitting nearly 30 cities before wrapping on September 4 in Mountain View, California. 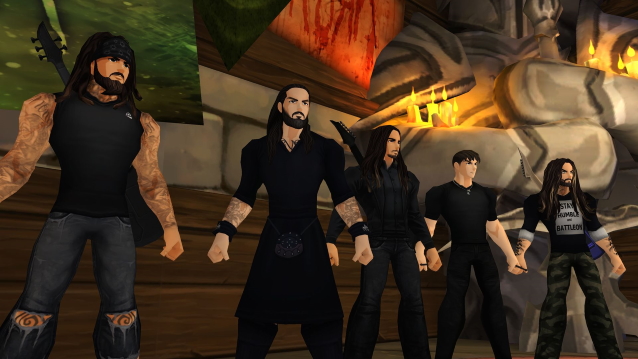