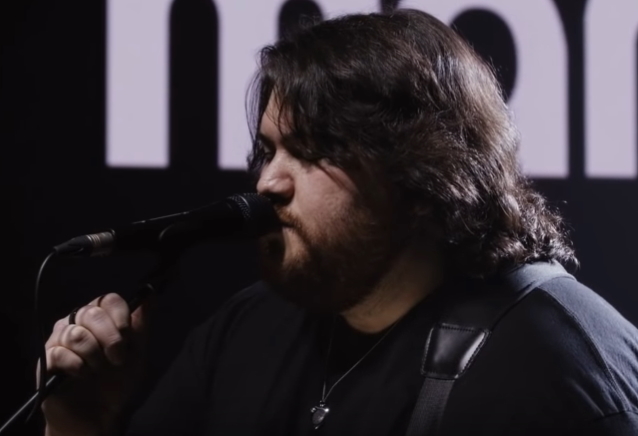 Wolfgang Van Halen's solo band, MAMMOTH WVH, made its late-night television debut on "Jimmy Kimmel Live!" Thursday night (February 11). The band comprised of Wolfgang Van Halen (guitars/vocals),Ronnie Ficarro (bass/vocals),Jon Jourdan (guitars/vocals),Frank Sidoris (guitars) and Garret Whitlock (drums) performed its first single, "Distance", written as a tribute to Wolfgang's father and guitar icon Eddie Van Halen. The song, which Wolfgang wrote while his late father battled cancer, was not originally intended to be on MAMMOTH WVH's upcoming self-titled debut album, but due to the overwhelming response, it has been added as a bonus track. All of Wolfgang's proceeds from "Distance" are being donated to Mr. Holland's Opus.

"Mammoth WVH" will be released on June 11 via Explorer1 Music Group/EX1 Records.

"Distance" is an open letter to Wolfgang's father, declaring "no matter what the distance is, I will be with you." The accompanying music video for the song is created from a collection of family home movies through the years and offers an inside look in to one of music's most notable personalities. Chronicling the family through the years, the video ends with a touching voicemail left from Eddie to his son.