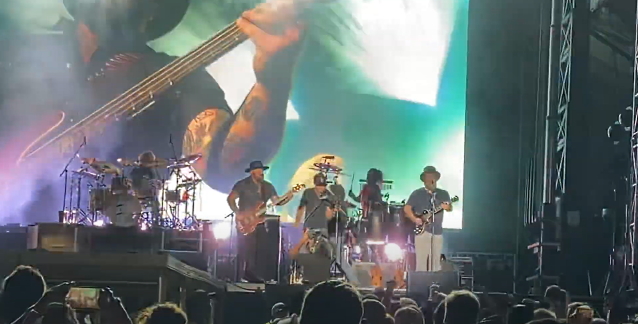 ZAC BROWN BAND performed a cover version of the METALLICA classic "Enter Sandman" during last night's (Saturday, July 24) concert at the Twin Cities Summer Jam in Shakopee, Minnesota. Fan-filmed video footage of their rendition can be seen below.

ZAC BROWN BAND has been playing "Enter Sandman" during its live shows for about a decade, including in January 2019 when the American country group was joined by Dave Grohl in Atlanta, Georgia to close out its set at the Bud Light Dive Bar.

In a 2018 interview with Atlanta Business Chronicle's Phil W. Hudson and Atlanta radio personality Tug Cowart, ZAC BROWN BAND multi-instrumentalist Clay Cook stated about the group's cover of "Enter Sandman": "It's been around for seven years. People don't get tired of us doing it."

ZAC BROWN BAND founding member and songwriter John Driskell Hopkins told Herald-Tribune back in 2014 that playing "Enter Sandman" "is my favorite, by far."

ZAC BROWN BAND is a multi-platinum, Grammy Award-winning Southern rock group led by frontman Zac Brown. Throughout their decade-long career, ZAC BROWN BAND has had six consecutive albums reach the top 10 of the Billboard 200 and five consecutive albums debut at No. 1 on Billboard's Country Albums chart. To date, the group has won three Grammy Awards, including "Best New Artist" in 2010, sold more than 30 million singles, nine million albums, has achieved 15 No. 1 radio singles and are the second act to top both the Country and Active Rock formats.

ZAC BROWN BAND has headlined seven North American tours and currently holds the record for most consecutive sold-out shows at the iconic Fenway Park. Since their debut, ZAC BROWN BAND has developed a reputation with critics and fans alike as one of the most dynamic live performers, marked by strong musicianship that defies genre boundaries.