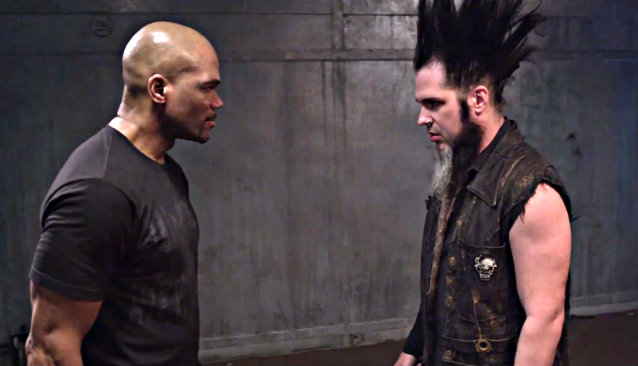 "Noise Revolution", the video for the brand new collaborative track between DMC of the legendary RUN-DMC and STATIC-X mainman Wayne Static, can be seen below. The track is also available for purchase on iTunes.

DMC, one of the pioneers of hip hop music, is also credited as being the first to blend rock with rap, most notably with a RUN-DMC rendition of "Walk This Way" by AEROSMITH, which also featured vocals by Steven Tyler.

"The 'Noise Revolution' song and video is a powerful statement that shows that our art and creativity is the most important representation of the people," said DMC.

"Working with Wayne Static and Matt Zane to knock down walls and bring people together with a positive message is inspiring and empowering!"

Static, who is no stranger to combining different styles and is known for the creation of "evil disco," did not hesistate when he got the chance to work with one of the all-time great hip hop artists.

"The opportunity to work with a legend like DMC was a great honor and an experience like no other," said Wayne. "We performed onstage together in Austin a while back and I hope we have more opportunities to perform together again."

Wayne also went on to explain how he has always been in favor of mixing several styles of music.

"I have always believed combining different genres of music is a great way to create exciting new sounds," he said. "In fact, I've based most of my career on combining unexpected styles in innovative ways. This collaboration with DMC is a prime example of how we can break through traditional expectations of metal and rap to create a badass new sound, and that is really the theme of the song for me as well. This song is a 'Noise Revolution'!"

Zane was equally excited to be presented with an opportunity to direct the "Noise Revolution" video.

"I was all about THE DOORS, VAN HALEN, KING DIAMOND and RUN-DMC when I was growing up," he said. "When DMC flew out to Los Angeles to meet, I couldn't believe I was sitting across the table from him discussing concepts for something I was going to direct. I was trying to keep it together but really my mind was going crazy. I didn't want to let on that I was such a huge fan and had all the records."