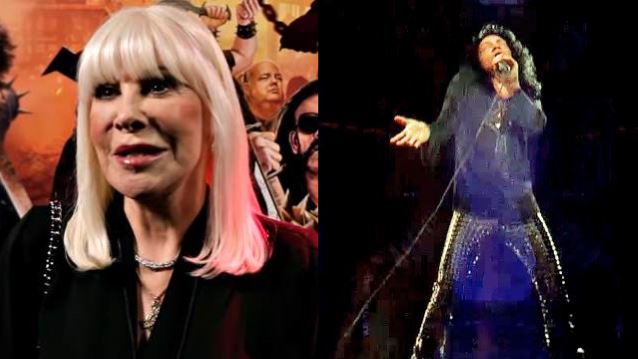 WENDY DIO On RONNIE JAMES DIO Hologram: 'It Was Just Like Having Him Back On Stage Again'

During an appearance on the August 15 edition of the SiriusXM satellite radio show "Eddie Trunk Live", Ronnie James Dio's widow/manager Wendy spoke about the hologram of her late husband, which made its debut at the Wacken Open Air festival in Germany on August 6. Created by Eyellusion, the surprise appearance of the heavy metal icon during DIO DISCIPLES' set closed out the massive metal event which was attended by more than 75,000 fans. A few excerpts from the chat follow below (transcribed by BLABBERMOUTH.NET).

On what her initial reaction was when she was first approached about the hologram idea:

On what it was like seeing the hologram at Wacken Open Air:

Wendy: "We went down into the pit to watch it. And I have seen it over and over again in rehearsals and so on and so forth, but actually seeing Ronnie up on stage with his band, I was brought to tears, as were all the fans that were near me. Because I was down in the pit, I could see the fans, and they were all enjoying it, but crying, and it was very, very emotional. But I think it was a lot of love. It was emotional with love.

"The fans in Germany were fantastic. They really got it, and they loved it. And I think you have to see it, really, to know what it's about. It's amazing. It's like having Ronnie back again, which is wonderful. It was very emotional. I didn't think that I was gonna cry, but I did. I broke down. And a lot of fans were there with me, and it was comforting that they were feeling the same thing I was feeling."

"Some of his crew members that were there, like Paul Dexter, who did all the designs and was Ronnie's lighting designer and stage designer for years — he was the one who designed the 'Sacred Heart' set — he was the one who was there, and he was crying. I mean, everyone that knew Ronnie, it was so realistic. It was just like having him back on stage again."

On where the vocal track came from:

Wendy: "It was an isolated track from one of his live shows. [The rest of it is] live playing, and they are playing live to an audio track — of just his voice. Only his voice. Everything else was live. [There was] a lot of rehearsing and a lot of listening to the music and making sure that they were in synch with Ronnie. But, as I said, they played with him for over twenty years, so it was like they were back on stage with Ronnie again."

On whether the hologram was displayed during the rehearsals:

Wendy: "The last [two] rehearsals, yes. Not the beginning rehearsals — the band rehearsed by themselves — but then the last rehearsals we did with the hologram, yes. But it still wasn't the same as being on stage. I was at the rehearsals, and it wasn't moving like it was when I saw him on stage with all the effects and the band and everything really playing. It was totally different."

On whether she thinks Ronnie would have approved of his likeness being used in this way:

Wendy: "Because of the way he loved to do stage sets and fantasy and everything, I think he gave us [his] blessing. I like to think he would, and we did it with love, so we hope he did."

On what the reaction from the fans has been to the Ronnie James Dio hologram:

Wendy: "I would say ninety percent positive. Ten percent, you always get the naysayers, no matter what you do. But, you know, I think it's just been, actually, amazing. I think the people that haven't seen Ronnie would love to see it. And people that have seen Ronnie would love to see him again, especially with his bandmates. I mean, Simon [Wright, drums] and Craig [Goldy] had played with Ronnie for over twenty years. Scott Warren had played with Ronnie for seventeen years. Oni Logan and Ripper Owens were part of our family; we hung out with them, they stayed at our house, and they were our friends. And Bjorn [Englen] is the only newcomer to this, the bass player. But, I mean, this is like Ronnie's family; this is Ronnie's family going out. For twenty years, he's played on stage with these people."

On the future plans for the Ronnie James Dio hologram:

Wendy: "We kept it secret [before the Wacken Open Air show]. We did not want anyone to know about it beforehand. Some people that were good friends knew about it, but we had not advertised it or anything. We wanted it to be a complete surprise, to see how it went over and how the fans liked it, because that's what we care about more than anything. Ronnie would care about what the fans thought. So we did it at Wacken. No one knew at Wacken. I did a press conference at Wacken beforehand, before the show, but I just said that we had some special things for them to see; I didn't reveal it at all. We did one song with Ronnie at the end. What we wanna do is, if everyone likes it, is we'd like to do a whole show, with Ronnie coming in and out, doing maybe six songs, and he would come in and out during the set of the DIO band playing with him. And we might want to do a debut in America of the same show we did in Wacken, because it's not fair for the Americans and the Canadians that didn't get to see it, whereas the Europeans did. So we might do a special show for fans and friends and press here. We're talking about that right now."