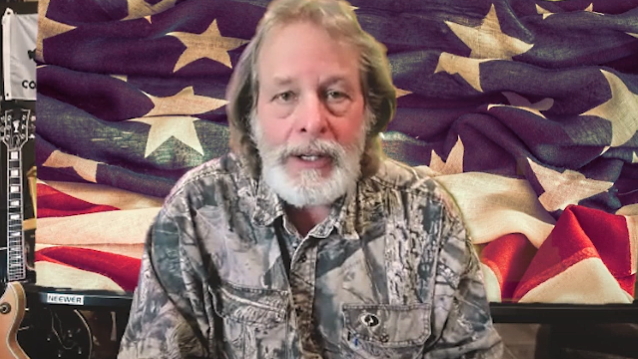 What Do Americans Think Of The War In Ukraine? TED NUGENT Has His Finger On The Pulse

In a new interview with Eric Bolling, the host of Newsmax's "Eric Bolling The Balance", outspoken conservative rocker Ted Nugent was asked to weigh in on what Americans think of the war in Ukraine. He said (as transcribed by BLABBERMOUTH.NET): "Well, number one, Eric, I'm honored and humbled that you know I actually connect with the pulse of real patriots, working-hard, playing-hard Americans every day.

"I'm glad you had Peter Navarro [the longest-serving senior advisor in President Donald Trump's White House] on, because his book title ['In Trump Time: A Journal Of America's Plague Year'] pretty much says what's on the minds of great Americans right now, that this is Trump time. And we know that none of this happened under Donald Trump because he always negotiated to make America stronger, make America safer, make peace through superior firepower, not just in hardware but in 'heartware,' in mindset, in spirit, in attitude and actions.

"So, America is so pissed off right now, their frustration level and pain and suffering is palpable," he continued. "But number one, everybody's praying for the innocent citizens in Ukraine. We know that the Ukraine government is corrupt and we know that Putin is a monster, but mostly I've gotta tell you, Eric, as concerned as we are about those innocent victims over there, we are just aghast that we don't secure our borders, that we don't stop the flow of fentanyl into our country, killing more Americans than [there] are Ukrainians dying. That the anti-gun people in this country are going berserk trying to disarm Americans while they celebrate the distribution of Kalashnikov machine guns to the people of Ukraine. They literally can't have it both ways, but they're so dishonest, so corrupt, so out of their minds and soulless that it's really exposing them to what used to be the middle ground. The moderates in America, they're starting to see the level of indecency and hypocrisy and dishonesty and abuse of power by our own government.

"My buddies in military and law enforcement, they're more angry than anybody because they see that their commander in chief is at least dangerously inept but more often than not treasonous in his actions, turning his back on American people.

"So that's the pulse of America out there, and believe me, it's an accurate one."

In the past, Nugent, who battled COVID-19 last April, had referred to the virus as a "leftist scam to destroy" former U.S. president Donald Trump. He had also repeated a narrative pushed by conservative media and disputed by health experts that suggests the official death count from the coronavirus is inflated.