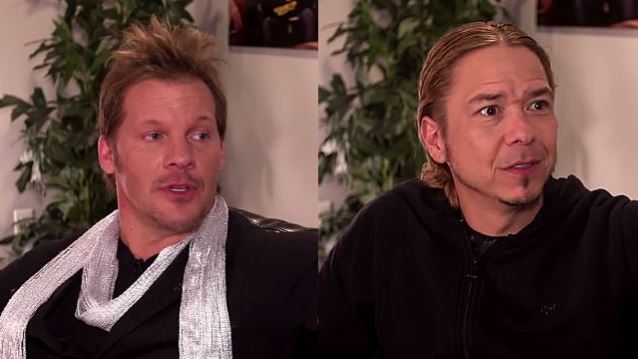 VH1 Classic's centerpiece in original programming, "That Metal Show", recently got up close and personal with Rich Ward and Chris Jericho of FOZZY. Watch the clip below.

Asked what makes a band "heavy metal," Ward said: "I think 'heavy' is a way that you carry yourself. I think heavy metal is something that is hard to necessarily say, 'That's it,' but you know it when you see it."

Jericho offered: "I think it's attitude; I really do. I think if you're talking about how this band plays nothing but blast beats, I've seen heavier bands that play nothing but slow parts. Like I said, 'Black Sabbath' by BLACK SABBATH, the heaviest song of all time, if I just played that drum beat by my own, you'd go, 'What is that? The waltz? What is this?' That's heavy. To me, it's attitude. It's the way it's played. It's the way you feel when you're on stage. And heavy metal is rebellion and it's freedom. It makes you feel like you can take on the world."

Asked what music means to them, Jericho said: "Music is freedom to me. Music is… You know, I have a lot of tattoos on my arm of different bands. It's not for the bands themselves, it's for how I feel when I listen to the bands. When I say it's freedom, if you're having a shitty day, if you're having a bad day, and you put on a song that makes you feel good, takes you back to a good time in your life, it always brightens your day. It takes you to a different place. It takes you back to the past."

Said Ward: "For me, it was just kind of a way out, to be something and to try to figure out a path to know what club I was gonna be in. Do you know what I mean?! It's like we all… humanity, we always put ourselves in tribes and cliques and stuff, and music was a place where I felt at home."

FOZZY's latest album, "Do You Wanna Start A War", sold around 5,600 copies in the United States in its first week of release to debut at position No. 54 on the Billboard 200 chart. The CD was released on July 22, 2014 via Century Media.