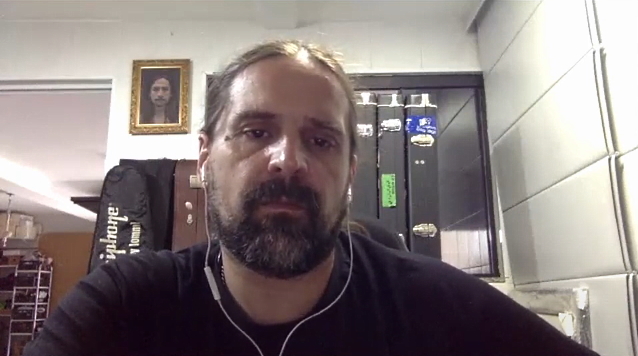 In a new interview with Montreal Rocks, guitarist Andreas Kisser was asked what makes a "perfect SEPULTURA show." He responded (as transcribed by BLABBERMOUTH.NET): "It depends. There are so many variables during a day. I think the perfect show is when you really put everything out of the normal life or the normal day and you put yourself, during an hour and a half, in a different world and you really go to the stage and you go to a different place — you act different and you feel different. Every artist will tell you that. If you see somebody on stage, off stage is very different characteristics and atmosphere. So, once we are able to do that, that's great — that we're gonna enjoy ourselves and really sing the lyrics with our fans and lights and all the stuff and really be there without really thinking anything else. And I have to say we are like that naturally."

He continued: "It really helps, the whole atmosphere of being on stage, celebrating music and stuff and really enjoy ourselves and really play the songs that we want to play and not really think about, 'What's the formation of the band of this music or this album, which label and stuff?' We don't do like, let's say, a political setlist — we play [songs] from 'Bestial Devastation' to 'Quadra', everything; whatever we feel pleased like and whatever the concept of the tour is. And the fans, they don't wanna know about all this bullshit that happens backstage, like fights with labels and managers and all that crap; they wanna go there and really enjoy the music, and that's what we do. And as long as we keep this feeling and this spirit, it's gonna be a great show, for sure."

While the pandemic paralyzed the entire world and prevented bands from touring, Latin America's biggest metal export SEPULTURA refused to sit back and feel like animals trapped in a cage. Therefore, in early 2020, the band seized the moment to start its own weekly "SepulQuarta" video podcast in which they invited other famous musicians from all over the world to not only discuss important topics but also perform a track from SEPULTURA's massive catalog together with the group. The resulting full-length compilation was released in August 2021, with the album containing 15 classics featuring internationally renowned guests and friends.