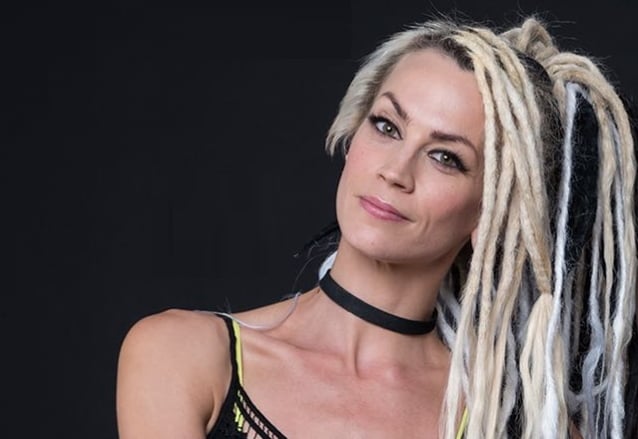 Tanya O'Callaghan says that "there is talk" of WHITESNAKE continuing to write and record new music even after the completion of the band's farewell tour.

In November, Tanya was named the latest member of the long-running hard rock outfit as the replacement for longtime bassist Michael Devin whose departure was revealed a few days earlier.

When asked in a new interview with VWMusic if she will be staying on to record in the studio with WHITESNAKE as well, Tanya said: "Yeah, hopefully. There's talk of it already. It's one of the questions. We'll probably keep recording, so absolutely. It's just touring that David [Coverdale, WHITESNAKE frontman] is done and set with. I don't think he can ever stop writing music, he's a song machine, obviously, he's an incredible songwriter. So, here's hoping there are loads and loads of albums in the making over the next several years or so. I'd be honored to be involved."

Tanya also said that joining WHITESNAKE at the end of its run is "actually the best part of it because I get to do the farewell tour. I mean, it's gonna be probably two years to do everything, but it's extra special because David is actually retiring from touring after this," she said. "I know a lot of bands do the farewell thing for ten years, but he has said he's going to continue writing and doing albums, which is awesome. I think it's extra special especially the fact that we're coming out of the whole world being locked down, and not seeing events. I think it's just going to be magical in terms of energy, and so I love that I'm doing the farewell tour. I think it's super special. It's not just a tour, it's the farewell tour."

Last month, Tanya told Antihero about how she landed the WHITESNAKE gig: "David would've known of me, and we played the same festivals. And he called me directly… It was a direct call, and yeah, just a straight ask. But it is a process of putting the years in and being out there in the scene. There is no magic formula."

She continued: "People ask, 'How did you get the gig?' It's just this bizarre unfolding of, I've been working my ass off for years touring, and people are seeing you play, and you must have a presence. And, obviously, your CV speaks for itself. And then it's just — I don't know if the universe aligns, and WHITESNAKE happened to need a bassist. And I'm very honored that David called me immediately. I guess it was in his head from seeing me play. It's a total honor. And it's an amazing band. And just all amazing players."

In early 2020, WHITESNAKE was forced to cancel its U.S. tour with SAMMY HAGAR & THE CIRCLE and NIGHT RANGER so that Coverdale could undergo surgery for bilateral inguinal hernia. Eventually, all of the shows were canceled due to the coronavirus pandemic.