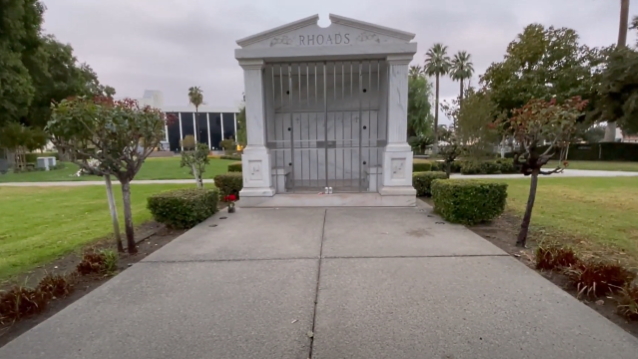 Photos: RANDY RHOADS's Family, Friends And Fans Gather At His Gravesite To Mark 40th Anniversary Of His Death

A number of friends, family, fans and fellow rockers gathered this past Saturday (March 19) at late OZZY OSBOURNE/QUIET RIOT guitarist Randy Rhoads's gravesite at the Mt. View Mortuary & Cemetery in San Bernardino, California to mark the 40th anniversary of his death. Among the well-wishers to a marble mausoleum bearing the Rhoads name were Randy's sister Kathy and brother Kelle. Photos of the event can be seen below.

People reportedly travel from around the world, as far as Japan and New Zealand, to the cemetery to pay tribute to the iconic axeman. Back in 2012, on the 30th anniversary of Randy's death, hundreds of heavy metal fans and fellow musicians gathered at his gravesite, including Tom Morello (RAGE AGAINST THE MACHINE),Zakk Wylde (OZZY OSBOURNE) and Frankie Banali (QUIET RIOT).

In Honor of RANDY RHOADS...
Such a beautiful Saturday filled with so much love for Randy shared with Family, Friends and...

Visiting Randy's final resting place with his family and friends, on the 40th year after his tragic and untimely death....