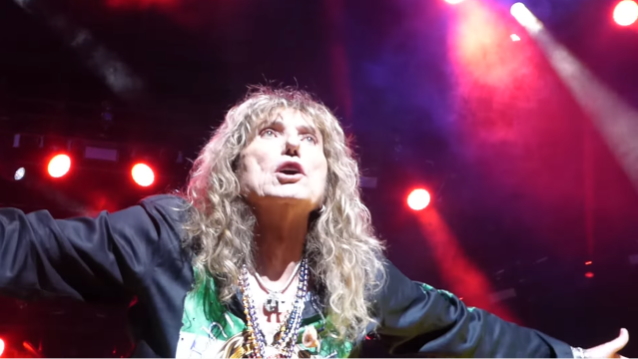 WHITESNAKE has been forced to cancel a third concert on the band's European tour due to an infection of the sinus and trachea suffered by frontman David Coverdale.

Earlier today (Tuesday, June 28),Coverdale released the following statement via social media: "As stated earlier, I am still under doctor's orders of bed rest, and to not sing for 5 days as i recover from this sinus infection. That time frame includes the show in Zagreb this Saturday, July 2nd so we are unfortunately going to have to cancel the Zagreb show as well.

"This is obviously very sad for us, especially our band members that were getting to perform before hometown crowds; Michele Luppi, our Italian Stallion was looking forward to playing in Milan in front of his friends and family, and of course Dino Jelusic, the Pride of Croatia was going to be able to give his all, to his hometown of Zagreb.

"We regret that this is necessary in our attempt to get healthy and be able to finish the rest of our tour."

WHITESNAKE previously announced that it was scrapping its concerts in Milan, Italy (June 28) and Vienna, Austria (June 30) due to Coverdale's condition.

David, who turned 70 in September, is not the first member of WHITESNAKE to fall ill during the group's current European tour. Guitarist Reb Beach missed several shows on the trek earlier this month after being "under the weather." This past Saturday, WHITESNAKE canceled its show at the Rock Imperium festival in Spain due to the fact that drummer Tommy Aldridge "went down" and "was bad enough at the time to have missed the first show ever in his career," according to Coverdale.