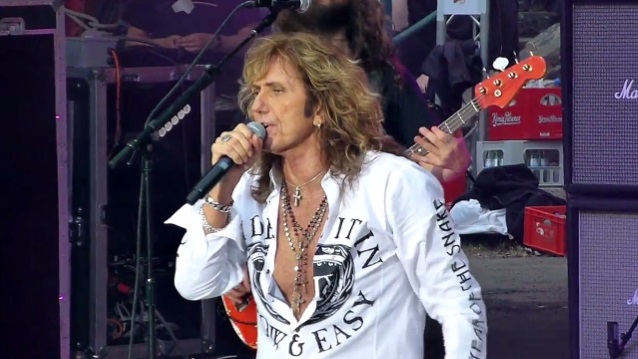 Video footage of the contruction of WHITESNAKE's new studio, Hook City, in Reno, Nevada, can be seen below.

WHITESNAKE mainman David Coverdale revealed last month that the band found "a new super guitarist" to replace Doug Aldrich, adding that "contractual commitments on his side" prevented the group from announcing his addition to WHITESNAKE.

Coverdale also revealed that WHITESNAKE is "deep into the pre-production of the new WHITESNAKE project, which is so exciting to me, it's beyond words."

Dutch guitarist Adrian Vandenberg, who was a member of WHITESNAKE during the band's successful late 1980s period, recently told the classic rock program "Radio Fireball" about the possibility of rejoining WHITESNAKE: "Never say never. David and I will always do something in the future, whether it's with the two of us acoustically or whether it's a blues album or a rock album or a tour. We are too good friends not to do it and we have too much fun working together. But it has to be next to [Adrian's current project] VANDENBERG'S MOONKINGS, not instead of."