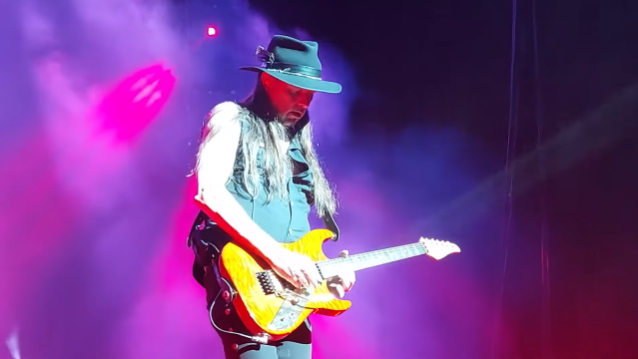 Fans have expressed their concern about the well-being of WHITESNAKE's longtime guitarist Reb Beach after he missed several shows on the band's ongoing European tour.

Beach sat out four dates on WHITESNAKE's current trek, which kicked off in early May in Dublin, Ireland: June 14 in Prague, Czech Republic, June 17 at the Graspop Metal Meeting in Dessel, Belgium, June 19 in Munich, Germany, June 21 in Zurich, Switzerland.

After the Prague concert, fellow WHITESNAKE guitarist Joel Hoekstra addressed Reb's absence in a tweet, writing: "Tonight @Whitesnake rocked @PrahaEU – Prague, Czech Republic along with our friends @europetheband ! A little last minute stress as Reb Beach was under the weather and I had to cover his solos. But, we gave you our best Prague!! The show must go on! #Whitesnake #TheFarewellTour".

Hoekstra's most recent update on Beach's condition came earlier today (Wednesday, June 22) in response to a fan on Twitter. Asked if Reb has gotten over his illness yet, Joel wrote: Hopefully Rebel returns immediately. Nobody misses him more than me. #GuitarTEAM".

While living in New York City, Reb hooked up with his future bandmate, bassist and frontman Kip Winger. Reb and Kip formed the band WINGER and the rest is history. The two proved to be incredible writing partners, crafting multiple platinum records that featured no less than six Top 40 singles. With music that was commercial yet complex.

Beach released an instrumental solo album, "A View From The Inside", in November 2020 via Frontiers Music Srl.

Tonight @Whitesnake rocked @PrahaEU - Prague, Czech Republic along with our friends @europetheband ! A little last minute stress as Reb Beach was under the weather and I had to cover his solos. But, we gave you our best Prague!! The show must go on! #Whitesnake#TheFarewellTourpic.twitter.com/LQK7Rp470d

Hopefully back ASAP! Nobody missed him more than me😁

Thank you! Hopefully Rebel returns immediately. Nobody misses him more than me. #GuitarTEAM