WHITESNAKE Postpones Japanese Tour Due To Ongoing Threat Of Coronavirus

WHITESNAKE has postponed its previously announced Japanese tour "due to the ongoing threat of the coronavirus."

"We regret to announce that WHITESNAKE's Japan Tour which had been scheduled for March has been unavoidably postponed due to the ongoing threat of the Coronavirus.

"Currently, we are working on rescheduling the dates. Your purchased tickets for the original dates will be valid for the rescheduled dates. Please ensure you keep your tickets safe. For those customers who wish to receive a refund, we will announce details of the refund process once we announce the rescheduled dates.

"We deeply apologize to all parties concerned especially those customers who bought tickets and have been looking forward to the WHITESNAKE shows."

Other artists who have announced changes in show schedules, citing safety concerns, include SLIPKNOT, LACUNA COIL and SONS OF APOLLO.

Coronavirus, which originated in China, has already claimed more than 3,000 lives worldwide, including nine in the U.S.

South Korea has recorded a total of 5,328 confirmed cases, the largest outbreak outside of mainland China.

WHITESNAKE has been touring in support of its latest album, "Flesh & Blood", which was released lat May via Frontiers Music Srl. The disc follows the 2011 critically acclaimed studio album "Forevermore" and 2015's "The Purple Album", a reimagining of DEEP PURPLE classics from WHITESNAKE mastermind David Coverdale's time in that band.

Joining Coverdale on "Flesh & Blood" is the band comprised of Reb Beach and Joel Hoekstra on guitar, Michael Devin on bass, Tommy Aldridge on drums, and Michele Luppi on keyboards. 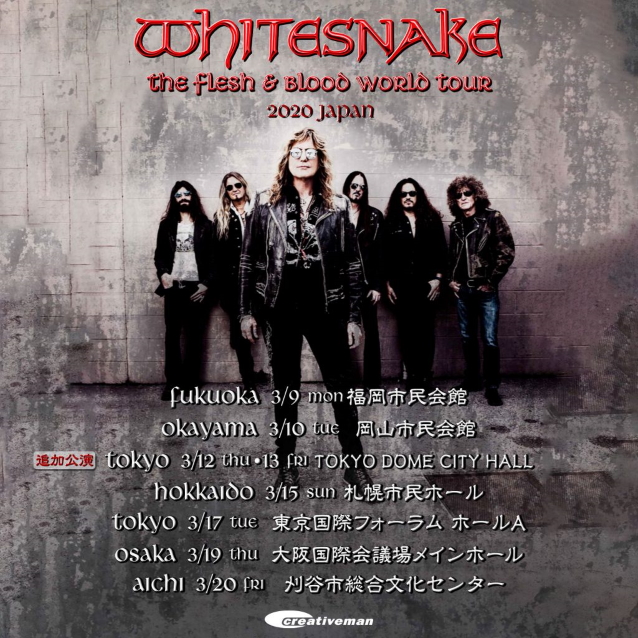